New Delhi/Lucknow: The Narendra Modi government on Monday cornered the Akhilesh Yadav government in Uttar Pradesh, and questioned the deteriorating law and order situation in the state in the wake of the brutal rape-murder of two minor girls in Badaun district, followed by a fresh incident of the gruesome gangrape-murder of a 22-year-old woman strangulated to death in Bareilly.

The Union home ministry Monday shot off twin missives to the state government demanding to know why the SC/ST Prevention of Atrocities Act had not been slapped on the accused in the Badaun case, where state police personnel have been found involved. The MHA’s second missive to the state government came hours after reports of a second gangrape-murder incident — of a 22-year-old woman in Bareilly’s Baheri area.

As politics over crime in UP took centrestage, the Badaun case drew international attention too, with the United Nations stepping in to condemn the incident and seeking immediate action against the perpetrators.

“There should be justice for the families of the two teenaged girls and for all women and girls from lower caste communities who are targeted and raped in rural India. Violence against women is not a women’s issue, it’s a human rights issue,” UN resident coordinator in India Lise Grande said.

Clearly on the backfoot, UP CM Akhilesh Yadav on Monday removed principal home secretary Anil Kumar Gupta for his failure to control law and order in the state. This comes two days after UP chief secretary Jawed Usmani was removed. Mr Yadav also met governor B.L. Joshi and apprised him of the action taken by his government. The governor is learnt to have voiced concern over the spate of brutal crimes committed against women and children in the state.

In Lucknow, sources said the CM was upset at the bad publicity Badaun was bringing to his government. The state informed the MHA that the twin victims in the Badaun incident belonged to the OBC community. The UP home department spokesman said since the victims in the Badaun gangrape case did not belong to the Scheduled Castes/Tribes, the question of invoking the SC/ST Act did not arise.

However, the MHA lashed out against the repeated incidents of atrocities against weaker sections in the state. 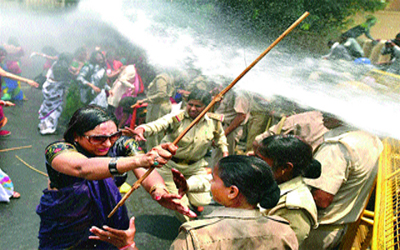 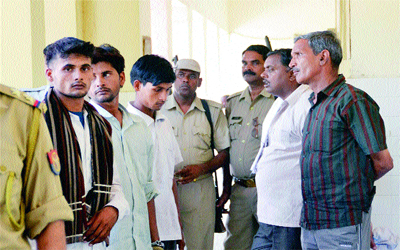 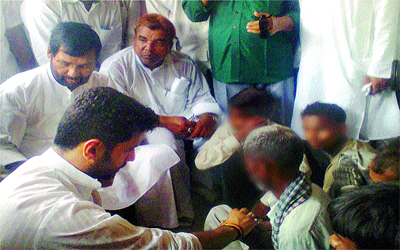 TOP:  Water cannon is being used to disperse BJP supporters protesting against the Baduan rape case in Lucknow.

MIDDLE:  The five accused in gangrape and murder of teenage Dalit girls, under police custody.

BOTTOM: Union minister Ramvilas Paswan with his son Chirag meets with the family members of rape victims in Badaun district on Monday.     — PTI

MLC predicts TRS will win 90 per cent of ULB seats

7 ministers in trouble even if TRS wins polls

Bandlaguda records 60 per cent poll even on working day

As part of Gaganyaan, first unmanned mission this December: ISRO