Speechless, spellbound and shocked - Kieron Pollard made everyone go through the arrays of expressions when he took an absolute stunner on the boundary rope. He first grabbed the ball one-handed leaping in the air. Then he lobbed the ball in the air

Lynn-Pollard acrobatics
If Aussie Chris Lynn’s ‘arching-backwards’ catch was spectacular, Kieron Pollard’s giant leap followed by an acrobatic dive was stunning. As he lined up to catch AB de Villiers’ skier, Lynn slipped a bit but he balanced well on his hunches to hold on to the ball. The social networking sites and youtube were also abuzz with Lynn-sane catch.

An IPL season wouldn’t be complete without a leaping catch of Pollard and the tall West Indian did it again. Kevon Cooper’s shot over long-on looked set for a six until Pollard came into the frame. He soared to an impressive height, plucked the ball and just when it looked the big man would touch the line, he lobbed it back into play before completing the catch with an acrobatic dive. 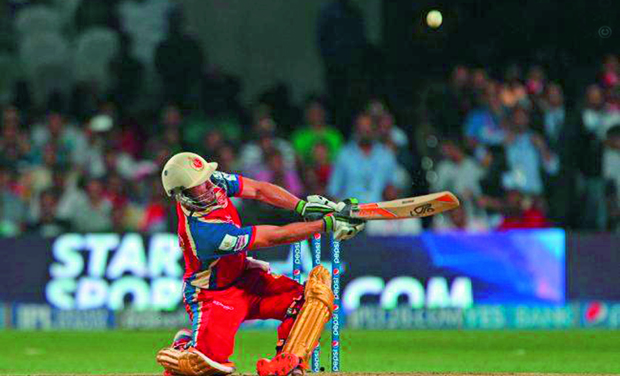 AB pummels Steyn
It was a mouth-watering clash. As AB de Villiers, arguably the most versatile batsman in world cricket, took on his illustrious countryman Dale Steyn, it was paisa vasool for the fans at Chinnaswamy stadium. AB made a mockery of the world’s best fast bowler and hammered him for 24 runs in an over. A scoop over fine-leg was outrageous and all that Steyn could do was smile and admire his compatriot.

Max attack
In hindsight, it’s baffling as to why Glenn Maxwell warmed the bench at Mumbai Indians even after being snapped up for million dollars last season. With no expectations this time around, the Aussie in the colours of Kings XI Punjab was the toast of the first-half of the IPL7. Maxwell’s success story reflected in Punjab’s performance and the team made it to the final for the first time in their franchise history. The Max attack began with a knock (95) against Chennai Super Kings in UAE and he proved to be bowlers’ nightmare since then.

Pollard, Starc spice it up
IPL and controversies are inseparable and an ugly mid-pitch altercation between Kieron Pollard and Mitchell Starc overshadowed an exciting game at the Wankhede stadium. As Starc ran in to bowl, Pollard pulled out from facing the delivery, but the Aussie pacer still fired the ball at the West Indian. Pollard flung his bat at the bowler, but luckily it slipped out of his hand to drop near him. Both the players were slapped with fines.

Mishra’s comical run-out
Amit Mishra’s dismissal against Rajasthan was nothing short of a farce. After failing to make contact with James Faulkner’s delivery, the Sunrisers player scampered to pick up a bye only to be run out. But not before a comedy of errors as the bails were dislodged only at the third attempt. First, it was wicketkeeper Sanju Samson who missed the stumps, then Faulkner got it horribly wrong from a straightforward position even as Mishra was strolling back toward his ground. Samson finally made amends.

Vintage Sehwag
While all the arc lamps were focussed on Glenn Maxwell, the Qualifier2 match between Kings XI Punjab and Chennai Super Kings surprised one and all. A bespectacled Virender Sehwag turned the clock back and produced a superb century to carry Kings XI to their maiden IPL final and the innings was a pure delight for the fans. The way he pummeled the likes of R. Ashwin, Ravindra Jadeja and Ashish Nehra revived memories of vintage Sehwag.

Tare Zameen Par
After Ambati Rayudu’s run-out sensationally tied the score, the equation for Mumbai was simple: one ball, hit a four or six and enter the play-offs. As they say, cometh the hour, cometh the man; Aditya Tare did a Javed Miandad to send Mumbai into the play-offs. Tare walked in amidst chaos to face his first ball and was pitted against Royals’ experienced pacer James Faulkner. The ball was sent over the fine-leg fence and the Mumbaikar became a poster boy.

Yusuf’s fastest 50
When Yusuf Pathan walked in, KKR needed 106 from 47 balls against Sunrisers to knock Chennai Super Kings off second place. Not many backed KKR then, but Yusuf was in different mood. The big-hitting Yusuf slammed Dale Steyn over deep midwicket for the fifth six of his innings to reach his 50 in 15 balls, a record in IPL. Steyn conceded 26 off that over, the most he has ever leaked in the league. By the time Yusuf was dismissed for 72 (off just 22 balls), the contest was as good as over.

Three cheers to Tambe
From a liaison officer to the mainstay of an IPL team, Pravin Tambe’s journey has been a fairytale. The Rajasthan Royals’ golden oldie continued his magic in the IPL7 by becoming only the seventh bowler to complete a hat-trick. In the 16th over of the match between Royals and KKR, Manish Pandey, Yusuf and Ryan ten Doeschate fell prey to leg-spinner. A charging Pandey was stumped, Yusuf was caught and bowled and the Dutchman was LBW. In the process, Kolkata lost six wickets for two runs!