Hyderabad:  Though most local Telugu and national news channels this time are desisting from giving any definite projections for the Seemandhra polls, NDTV Hansa on Wednesday came out with an exit poll survey which predicted a neck and neck fight between the YSR Congress and the TD to reach the magic figure of 88 in the House of 175 in Seemandhra.

However, Mahaa-News, backed by Telugu Desam Rajya Sabha member Sujana Chowdary, has predicted a massive win for the TD in Seemandhra, giving the party 129 out of 175 Assembly seats and only 42 to the YSR Congress.

Almost all the national channels that have aired their exit poll bulletins have predicted that the TRS will get a majority of seats, both in the LS and Assembly polls in Telangana.

Today’s Chanakya, another reputed organisation, in their exit poll also confined their predictions only to the Telangana region.
Popular Telugu news channel N-TV, has reportedly held back the latest survey report, most probably due to the massive victories posted by the Telugu Desam in the municipal and local body polls in Seemandhra. 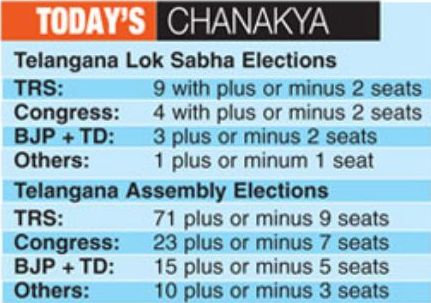