Synopsis: Anaamika comes to India in search of her missing husband Ajay, only to get caught in a web of politics, deceit and a series of surprises. Will she find her one true love?

Sekhar Kammula’s Nee Enge En Anbe (Anaamika in Telugu) is thankfully not a frame-by-frame remake of Sujoy Ghosh’s Kahaani, although it comes dangerously close on many occasions. For those who have seen Kahaani, this version can be a tad bit unoriginal, even disappointing if you were to scrutinize it to the last detail. The film seems to be eager to digress from the original and that intention is established in the scene where the heroine is introduced, because unlike Vidya Bagchi, Anaamika (the protagonist of this story) is not pregnant. At this point, you know that the climax is not going to be the same and the rest of the film builds up to this climax, which may not exactly be as powerful as the original, but packs enough punch in its own way. 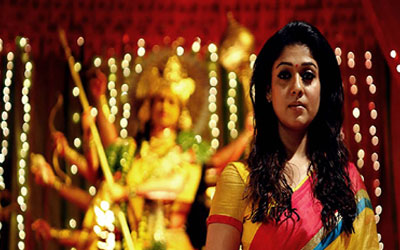 The story follows Anaamika, (Nayanthara), who comes to India in search of her software engineer husband Ajay Swaminathan, who seems to be missing. This native of Kanchipuram comes to Hyderabad – an alien city to her, be it in terms of language, people or culture. She goes straight to the police station to file a complaint about her missing husband Ajay Swaminathan (Harshavardhan) and that’s where she meets Parthasarathy (Vaibhav) a Tamilian police officer, who helps her out of her very delicate situation and quite unabashedly develops a massive crush on her. An encounter specialist Khan (Pasupathy) - a brash, chain smoking officer, who seems to mellow down and flare up at disturbingly short intervals, enters the investigation, blatantly informing Anaamika that her husband in fact, is one of the most wanted terrorists named Milan Damji. Whatever happened to “classified information” we wonder. Anyway, Anaamika’s faith in her husband is as unswerving as the faith in the Goddess she draws strength from as she wakes up to a differently dressed idol every day. Unrelenting in her search, aided by Sarathy, who doubles up as her driver on most occasions, she dodges death many times, but refuses to give up until she finally negotiates a deal to find him.

The devil, they say, lie in the details and that is the only place where perhaps this film disappoints its audience. There are too many loose ends in the plot and none of them are tied up – failing to give closure and letting down what could have been a potentially brilliant film. While it is understandable that Sekhar Kammula set the film in Hyderabad, especially since it is a bilingual – the bad lip syncs, dialogues in Hindi and Telugu does alienate the Tamil audience to a large extent, especially since the location and the language is largely unfamiliar. The background score in the film is impressive, but none of the songs are actually hummable.

Acting wise, this is Nayanthara’s film through and through. As Anaamika, she comes alive as a desperate woman, who will go to any lengths. Her transformation in the climax, we wish were a tad bit more elaborate rather than the sudden change, which takes everyone by surprise. We really wish she’d have a different hairstyle though – the hooded look is becoming too stereotyped. Pasupathy, a stellar actor is perfect for the role of the angry-one-minute and immensely-respectful-the-next encounter specialist Khan and he even manages to steal the scene on many occasions. Vaibhav is awkward initially, but eventually settles down into his character of a friendly and helpful police officer.

Moview Review | Get caught with ‘My Policeman’