President Pranab Mukherjee presents a shawl to Film-maker, Lyricist and author Gulzar as he honours him with Dadasaheb Phalke Award during the 61st National Film Awards 2013 function in New Delhi on Saturday. PTI Photo by Vijay Verma.

Gulzar, 79, received a standing ovation from the audience as he walked to the stage at Vigyan Bhavan to receive Indian cinema's highest honour. He was accompanied by his daughter Meghna, who got emotional.

"It rarely happens in life of someone whose job is to play with words that he fails to find right words to express his gratitude," said Gulzar after receiving the award.

"Army and film industry are the only two places where caste, creed and religion don't matter. With all honesty I can say that film people are beautiful. I can take an oath about their secular nature. I am grateful that I am a part of them and they are my participants," he added.

Gulzar was presented with the Swarn Kamal( golden lotus) medallion, a cash prize of Rs 10 lakh and a shawl by the President.

He is the 45th recipient of the the highest distinction given for contribution in the field of Indian cinema.

Gulzar paid tributes to the people who worked with him in the past and present beginning from Bimal Roy to Mani Ratnam.

"It was impossible to reach where I am today alone. I am lucky to have great teachers like Bimal Roy and SD Burman. Nostalgia is there but it is not right to live in nostalgia. You have to change with time," he said.

Gulzar's outstanding contribution to cinema started in 1963 as a songwriter in Bimal Roy's 1963 film 'Bandini'. He did not look back and worked with every possible name in the music industry.

After writing dialogues and screenplay for films, he also tried his luck in filmmaking and given films like 'Angoor', 'Maachis', 'Hu Tu Tu' among others.

"An award assures and reassures you work. An award is given to work better further. It's sort of an assurance of what you have done," he had told PTI.

The legendary poet however does not feel that he was a late recipient of the honour.

"People kept saying I will get this award when all my hair would be fallen and teeth would be broken. But I feel it is very much in time or may be early but not late at all because I think it's because I think I have a good body of work," he said.

As a director, Gulzar's last work was corruption drama 'Hu Tu Tu' but the poet has turned to filmmaking again. He is writing the script of Rakeysh Omprakash Mehra's tentatively titled 'Mirza'.

"I have done a full script for Rakeysh Omprakash Mehra and the film is tentatively titled as 'Mirza'. I have written the songs also. The film is a love story," he added. 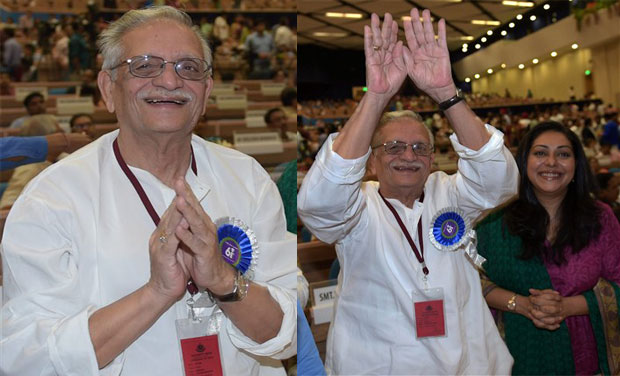