DC CORRESPONDENT
Published Mar 31, 2014, 2:04 pm IST
Updated Apr 8, 2019, 7:04 am IST
Rising above petty situations and accepting everything is the primary message of Ugadi

Mumbai: Ugadi is the new year for Telugus and  Kannadigas. In Maharashtra the same day is celebrated as the onset of the Maharashtrian new year and it is known as 'Gudi Padva'.

The name of the festival ‘Ugadi’ is derived from two words ‘Yuga' and 'Aadi’. ‘Yuga Aadi’ means ‘beginning of a new age’. It is believed that Lord Brahma, the creator started his work of creation on the ‘Chaitra suddha padhyami’ day, which came to be known as Ugadi.

The onset of spring also symbolically marks the beginning of new life. Ugadi is regarded as the beginning of a new Hindu lunar calendar with a change in the moon's orbit. On this day, predictions are made for the New Year. The 'panchanga shravanam' or listening to the yearly calendar is done traditionally at temples all over Andhra Pradesh and Karnataka.

Telugu people believe this an auspicious time to venture into new beginnings, projects and decisions.

Preparations for the festival begin almost a week before Ugadi. Houses are cleaned. People go shopping to buy new clothes, jewellery and other home accessories.

On Ugadi people wake up before the break of dawn and have a bath. The entrances of their homes are decorated with fresh mango leaves as it signifies a good crop and general well being. On this day, it is common practice to eat ‘Ugadi Pacchadi’ ( a special chutney, prepared especially for Ugadi).

The same is known as ‘Bevu Bella’ in Karnataka. This chutney is a mixture of six tastes comprising ‘neem flowers’, ‘mango juice’, honey, sugar and other ingredients with different tastes. 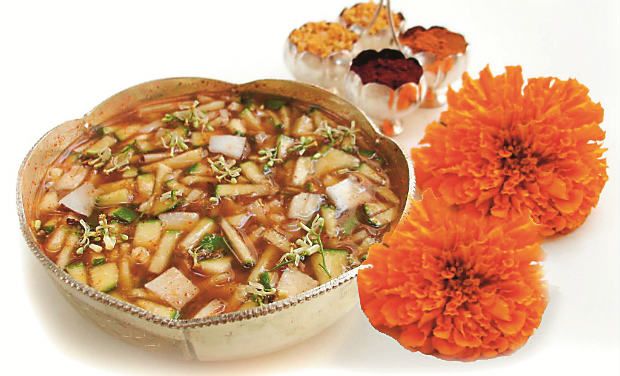 They believe they should rise above sorrow and happiness, success and failure and accept the experiences of the world for their own good. Rising above petty situations and accepting everything is the primary message of the Ugadi festival.