How do you live art? For the students of Chitrakala Parishat, it’s easy. At Sunday’s Chitra Santhe, they were seen living their paintings. While some put on Rajasthani costumes and walked around with a basket, selling Rajasthani paintings, some painted themselves gold or silver and stood absolutely still, like statues that suddenly moved and gave by-passers a scare. 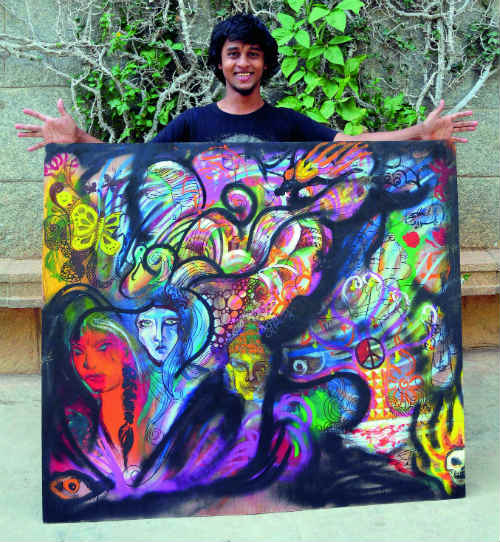 Artist Bharath Narayan was one such innovative student, who got more than 1,500 people to paint on the same canvas. “I set it up in the morning. I made a face in the middle and hair blowing around it, to indicate an explosion. I handed over a paint brush to anyone who passed by. It was interesting to see the thought process behind each one of their strokes,” he says.

While some painted smiles and beautiful eyes, some added a burqa onto the woman’s face. “Later, a kid came and dipped a big brush into the paint and made a big blotch, bang on the face. So I had to fix that,” laughs Bharath. But the final outcome was no less than a masterpiece and looked very professional.

Another such student was Sanjeetha M, who built a huge cart, which she lovingly called bandi. “It was a bandi on which all forms of art came together. I wanted to see people’s reactions. I hung paintings, piñatas, sculptures, vegetables, food, had karaoke going on as I pushed the cart up and down the street. People were really intrigued because there was so much going on, on a cart that is generally used by vegetable vendors!” she exclaims.

It’s heart-warming to see so much dedication to art in the city. “These were not projects we were required to do as part of the curriculum. In fact, we put off academic work to ensure we did something creative at Chitra Sante,” says Sanjeetha. K. Gubendhiran, who made a painting of the Delhi rape case says, “Four people paint coasted themselves and performed in front of my painting.” Vidhya Shree, one of those four people, adds that, “We wanted to portray ourselves as an art piece. Diane, Shalini and I painted ourselves, golden, silver and bronze and stood still for three hours constantly. The fourth one, Vivekananda, was painted black, and was supposed to be a shadow of the three of us. It’s the first time anyone did something like this in India, as it’s usually seen in European countries,” she informs. That surely must have been a task, as Chitra Sante was more crowded than a BBMP bus at peak hours!

Are you suffering from leaky gut?

Art for the heart’s sake

A novel-in-stories charts the secret life of a neighbourhood

Art on your feet