As the sun sets on 2013, DC revisits some of the major flip-flops that impacted the state’s political course. Some of them marred prospects of individual leaders and even changed lives of some, forever.

It was a year of LDF flop shows.

Each and every agitation launched by the front had to be called off half way through.

Though the solar case came as a major opportunity for the LDF to corner the UDF Government, it failed to capitalize on it.

The biggest example was the secretariat siege which was attended by thousands of party workers lasting just 48 hours.

With party workers turning unruly, even state leadership became jittery about the consequences and asked everyone to pack up and leave the Capital.

With the secretariat siege flopping, LDF leadership came up with the Cliff House siege agitation which was again seen by many as an unwise move.

Though it was planned for 140 days covering all Assembly constituencies, the LDF struggled to keep the agitation alive for 15 days and then called it off on Sunday.

In between, LDF leaders also got a dressing down from Sandhya Suresh, a home maker, who protested publicly against the blocking of the road to her house.

Next: Jayarajan continues to embarrass party

With leaders like E P Jayarajan at the helm, CPM does not require enemies to wreck the organization.

The CPM strongman from Kannur ruined the much publicized special plenum at Palakkad with just one front page advertisement in Deshabhimani from controversial businessman V M Radhakrishnan.

Majority of the delegates at the plenum were taken aback by the development, but Jayarajan not only defended the advertisement but even went on to attack the media for reporting the matter.

The very purpose of the plenum which was to free the party from the shackles of  mafia and ‘un-communist’ ways, received a huge set back due to the event.

While the party admitted there was lapse on the part of Deshabhimani, it let off Jayarajan without even a reprimand which goes to show his clout in the state unit.

Even as the party was struggling to come out of advertisement embarrassment, another of Jayarajan’s deal brought disrepute to the CPM.

He was instrumental in selling 23 cents of prime land which housed the old Deshabhimani office and press, for peanuts to one Danish Chacko who many say is ‘Chakku’ Radhakrishnan ‘benami.’ Soon after purchasing the property, Chacko sold it to the controversial businessman exposing the Jayarajan-Radhakrishnan nexus.

The party then removed Jayrajan from the post of general manager of the Deshabhimani but he was reinstated soon.

But this time around, party seems to be hesitant to take action against him. In the present AAP climate, delay in action will only affect the credibility of Marxists.

Next: Foot in the mouth

Foot in the mouth

A damage control exercise proved too costly for DGP Alexander Jacob who lost his job as DGP(Prisons).

It was an impromptu interaction with a section of TV journalists who had been pressing for his reaction on Facebook updates by TPC murder case accused from prison that created all the trouble.

Though Jacob initially declined it, he later decided to make use of the opportunity to convey his department's version.

His remarks that the Facebook row could be a ploy to scuttle the chances if any, of the accused in TPC murder case, of acquittal sparked a furore.

In fact, Jacob's blunt statement came as a blessing in disguise for the Government and particularly Home Minister Thiruvanchoor Radhakrishan, who had come under tremendous pressure to act.

Many say the former jail DGP was busy monitoring the preparation of chapathis and chicken curry by inmates even as antisocials in jails had a whale of a time.

Though Jacob has now been given the charge of modernisation of Fire and Rescue Services Department, there's a big question mark over his elevation to the dream post of DGP (Law and Order).

Next: Loses wife, job too

Former forest and sports minister K. B. Ganesh Kumar hoped to return to the Oommen Chandy Government once his divorce case with Dr. Yamini Thankachy was amicably settled.

With both of them joining hands to settle the property and financial issues coinciding with their divorce, Kumar got a reprieve when she withdrew her case against him.

This gave hope to Kumar and his father and KC (B) chairman R. Balakrishna Pillai that the former can be given a 're-berth' in the UDF cabinet. 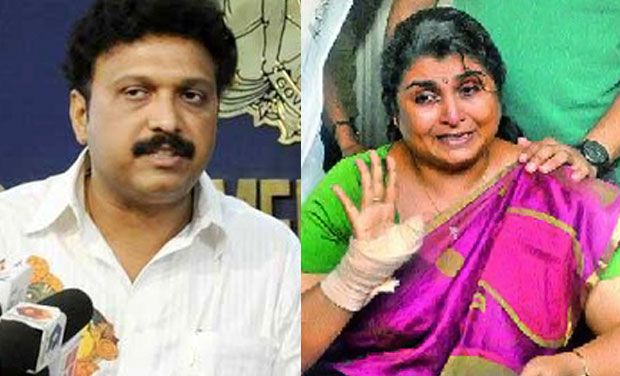 But by then the father-son duo had settled their differences and jointly demanded the vacant seat. With allies in the UDF also expressing different views, the ball fell on Chief Minister Oommen Chandy's court to take a final call on Kumar's re-entry.

But unfortunately Chandy has been postponing the issue due to much bigger headaches like solar scam, groupism in the Congress party and Facebook row.

Recently Kumar's camp tried to pressurize the Government to take him back by proclaiming that he was going to relinquish his MLA post, but a shrewd Chandy ignored him.

Next: Veteran hits a rough patch

This year V S Achuthanandan had nothing much to celebrate apart from his 90th birthday.

The veteran CPM leader faced setback one after the other through the year starting with the expulsion of his three personal staff A Suresh, V K Sasidharan, and Balakrishnan from the party.

Suresh who was the man Friday of Achuthanandan and Balakrishnan did what most Malayalees do to earn a living:  head for the Middle East in search of greener pastures and to keep the family going.

Even though the veteran leader tried his best to save them from disciplinary action, following the pressure mounted by the state committee the central leadership had no other option but to throw them out of the organisation.

Though the veteran leader was spared of disciplinary action, the party state committee passed a resolution seeking his removal from the post of Opposition Leader.

But central leadership put its foot down. The biggest shocker for him came in November when CBI special court gave the verdict in SNC Lavalin case, exonerating his bête noire Pinarayi Vijayan. With this his decade-long battle against the party secretary came to an end.

Actor Shweta Menon did a flip-flop after filing a complaint of molestation against Kollam MP Peethambara Kurup. She came out publicly against Kurup alleging that the MP had molested her repeatedly at the President's Trophy Boat race in Kollam and even lodged complaint with the police.

While the media and the Opposition LDF went hammer and tongs at Kurup, Congress rallied behind him.

Even Mahila Congress leaders who don't miss any chance of taking up cases of sexual exploitation were caught on the wrong foot.

The actor quite understandably came under tremendous pressure from the ruling front and film industry and finally was forced to withdraw the complaint.

The Congress veteran had a narrow escape, managing to save himself and perhaps his ticket for the 2014 Lok Sabha elections.

Government Chief Whip P. C. George enjoys  a free run and casts aspersions on all and sundry whether he is in   the Opposition or the ruling front.

Some time ago, JSS leaders were angry at him as George had spoken badly of their leader, K. R. Gouriamma, and her late husband. T. V. Thomas.

Though George apologised to her, JSS leaders did not forgive him.

Congress leaders, especially Home Minister Thiruvanchoor Radhakrishnan, were also up in arms against George. With allegations being raised against each other, both leaders were in no mood to relent.

George claimed that Thiruvanchoor’s son Arjun had  stakes in a bottling plant in Gujarat owned by controversial businessman Abhilash Muraleedharan, who is close to Gujarat Chief Minister Narendra Modi.

Thiruvanchoor retaliated that his upbringing did not allow him to reply to George’s allegations.

But matters came to a head when George flagged off BJP’s ‘Run for Unity’ marathon in Kottayam.

Though initially KC (M) Chairman K. M. Mani supported George, later he disowned him by releasing a statement saying that George’s tirade was his own.

But George is still on a ‘bowling’ spree and his latest ‘prey’ is Congress MLA K. Muraleedharan.

Fate of 40 % of UP ministers hangs in balance