Destined for this role: Kriti Sanon

Kriti Sanon is excited about her Tollywood debut with none other than superstar Mahesh Babu. Interestingly, the Delhi born and bred model-turned-actress earlier nurtured dreams of becoming an engineer. “I was a bright student. In my second year at an engineering college, I decided to pursue modelling during my free time,” she says. And the rest, as they say, is history.

Kriti won an online ‘Fresh Face’ contest and then bagged a modelling contract with Elite Model Management and a photo shoot with Dabboo Ratnani. That was followed by a flood of offers for TV commercials. “I did commercials when I was still in college and enjoyed it. But I decided to complete my education before moving on to films.” 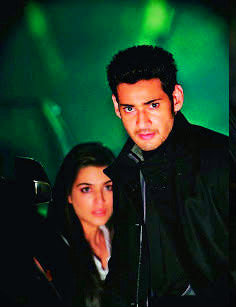 After graduating, she began auditioning for films while continuing to model. “I attended private acting workshops and also continued auditioning because I believe that one improves with each audition. I received a few offers but I wanted to be very selective as a debut movie is very important. It sets the tone for one’s career. But nothing great came my way. There was a B’town movie that I was about to sign, which got shelved later.”

How did she get her big break? “I heard that the director and producer were looking for a new girl opposite Mahesh Babu. I flew down to Hyderabad the next day and bagged the role after a few rounds of auditions. Since it was a big role I didn’t think twice,” Kriti says.

On co-star Mahesh, the 24-year-old actress says, “He is a superb co-star and so down to earth. He would help me sometimes and advise me on doing a scene in a particular way.”

“I’m a big believer in destiny and I think I was meant to do this role,” she adds.

The newcomer is all praise for the Telugu film industry. “I think the technicians here are really great. Also, when it comes to the storyline, people down South are more innovative. That also explains why so many South Indian films are remade in Hindi.”

But the actress also agrees that it is a male-dominated industry. “The industry is a little male dominated. And since 1 is an action thriller, Mahesh has a bigger role. But I am there throughout the film and my character plays an important part in his life,” Kriti admits.

Recently, the poster of her debut film was in the news after it was termed “regressive”. What does she have to say about it as a woman? Kriti disagrees, “I would never do anything that would disrespect women in any manner. The shot used in the poster is part of a song and once you watch the song, you will understand that it does not disrespect women. It goes with the lyrics and that’s the reason I did it. Making that the poster was a creative call.”

■Mahesh Babu is doing it!
■Mahesh Babu fans attack Samantha on Twitter
■'1' will be the best film in my career: Mahesh Babu