Your dog, Your problem

Bangalore: Posters carrying messages like “Footpath is not your dog’s toilet. Please carry a shovel and a bag for your dog’s shit” stuck on almost all trees along pavements greet dog walkers in
the National Games Village. They cannot escape them as at least 50 trees along the pavements carry the posters, with  one in front of the judiciary block being more direct than others, telling the walkers,  “You are responsible for the dog and its shit.”

The posters have been around for a couple of months now as occupants of the games village, tiring of the dog poop on their pavements, decided to teach the dog owners a lesson in hygiene. A residential complex of about 2534 flats in Koramangala, the National Games Village has several blocks, each of about 220 to 250 flats, mostly occupied by government servants, who received them during their tenures in service. A considerable number of the occupants have pets and pedigree dogs are a favourite with the many ex-army personnel living here.

While the dogs may bring sunshine to the lives of their owners, they are proving a nuisance to others as walkers and joggers using the pavements in the mornings and evening find dog faeces in their tracks. When nothing came of several rounds of meetings  to find a solution, the residents decided more direct action was called  for.

Members of a couple of residents’ welfare associations and the NGV Federation came up with the idea of putting up  posters to create more awareness about keeping the pavements clean and free of dog poop. But they knew that the contents of the posters had to be hard hitting if they were to do the trick and they seem to have been proved right as there is not as much dog shit  on the footpaths as before now.

“We had to resort to this tactic as every other trick in the book had failed. We tried to raise this issue in a meeting, but the nuisance continued.  Now after these posters have been stuck, there is a change,” says Indira Mishra, an association member, who was the brain behind the tactic. “Next time we plan to put up a board instead of sticking posters to trees,” she adds.

As dog poop on pavements is a common problem in most apartment complexes some high-end builders and realtors are now allotting space for pet toileting when developing them. Mantri Tranquil is one of these pet-friendly developers but  more may have to follow suit considering how popular pets are in homes in Bangalore, say pet experts.

That the number of pet owners is only increasing  in the city with every year is obvious from the flourishing pet care shops, salons and clinics in Bangalore, they observe, adding that with so many pets around, there are bound to be complaints about the nuisance they can cause from others not so fond of them. 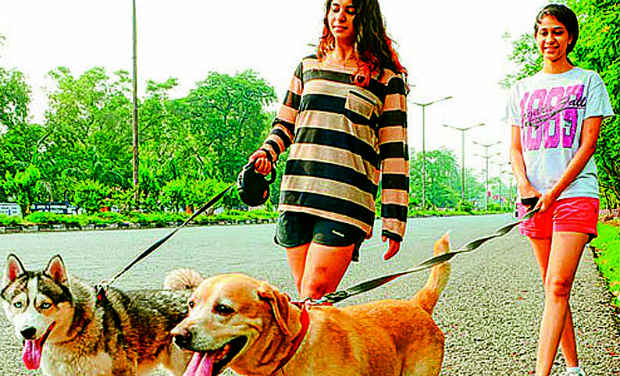 “The menace of dog poop in a common area can plague many communities as there are an equal number of animal lovers and non-animal lovers in society,” notes Dr. Pawan Kumar, a pet expert and veterinary surgeon at the Cessna Veterinary Hospital.

Aware of the problems that pets can bring with them, several apartments  do not allow occupants to have them in their homes.  While this is a drastic solution, pet experts say people can have animals in their homes provided they spend some time training them.  “There are an umpteen number of ways pets can be toilet trained both at home and outside. It needs a little patience but then your dog will be well behaved.” says one expert.

Next: Can only act on complaints: BBMP

Can only act on complaints: BBMP

BBMP authorities, for their part, say they can intervene in such matters only if there is a complaint. “Section 22 of the Karnataka Municipal Corporation Act 1976 says nuisance includes any act, omission, place or thing, which causes or is likely to cause injury, danger, annoyance or offence to the sense of sight, smell or hearing or a disturbance to rest or sleep,” explains Dr. Parvez Piran, Joint Director, Animal Husbandry, BBMP.

Next: Start training your dog when it still is a puppy

Start training your dog when it still is a puppy

There is a way out of this problem. For a dog owner, a pet is like his or her baby.  Every pet owner should accept responsibility for everything that the pet does. If the pet is creating a nuisance, it should be trained not to.  Training a dog from when it’s a puppy is very important as once it grows old, it’s difficult to change its habits, but still it’s worth a try.

Pet owners can train their pets themselves in  hygienic toileting habits  with the guidance of trainers. They can carry a poop scooper and bags that are available at most of the pet care shops and time will do the rest of the trick.

Well behaved pets are allowed inside restaurants, shopping malls and even travel on metros in countries like the USA and UK. It will take ages for that to happen in India.