No easy scramble to the top

One look at the speck on top of a distant cliff and I was convinced that there was no way I was going to make the climb up. One look at the very handsome, expressionless, mules waiting to carry people to the top and I was overcome with sympathy. One look at me and the mules fainted.

Tiger’s Nest is a spectacular Buddhist monastery in Bhutan, precariously built into the vertical rock face of a cliff at 10,240 feet. As I reluctantly trundled along the first 100 steps, I wondered at the sheer insanity of a construction so remote and inaccessible. But insanity is often what keeps us driven.

I rested every 30 paces, and as we climbed, breathless, up to each stop, I was convinced that this would be my final resting place. To gently die among the clouds, watching spectacular vistas of deep green, pine-covered slopes did not seem like too bad an idea.

At each stage, as part of a national conspiracy, the locals smile and tell you that the worst is over and it’s now just an easy scramble to the top. Nothing could be further from the truth. 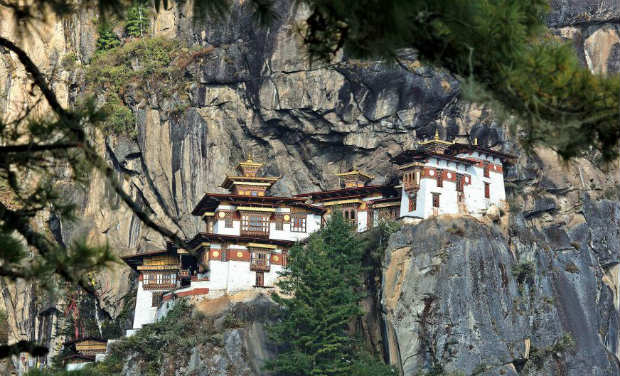 Apparently, Guru Padmasambhava alias Rimpoche flew to his cave on a tigress, which I  thought was a real smart thing to do. Tiger’s Nest derives its name from this legend and the monastery is built around his cave.

After a three-hour-long vertical trek, you suddenly realise that you are now way above the monastery and a steep valley with a waterfall standing between you and nirvana. This is where you start meeting people of all shapes and sizes and often elderly people who tell you, on their way back, that you have come thus far and it is absolutely worth it to get to the waterfall, and thereafter to Paro Taktsang, as the locals call it. 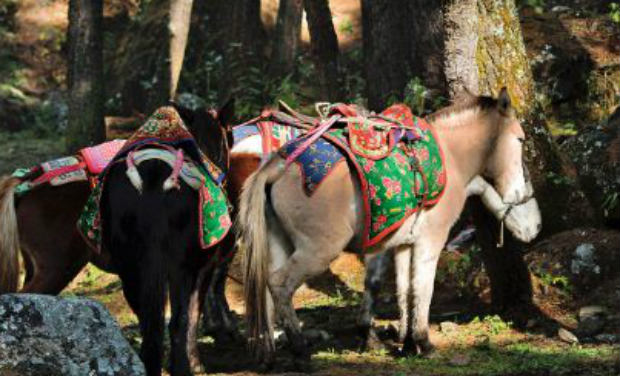 So I kickstarted the flying tiger in me and scrambled vertically downwards, wobbly legs and all, to the icy waterfall. Down to the crystal stream and then up to Taktsang, where I was greeted by friends who looked at me in disbelief at my having made it, given my reluctance and 12 kg of camera and lenses.

The view from the top in all directions leaves you awestruck and completely overshadows the challenges of the climb. Prayer flags flying in the clean wind, the spray of the icy waterfall, the sound of flowing water, blue skies, the deep coppertone rockface and the green pines make the visit an absolute must do and it is not for nothing that this is the uber tourist destination of Bhutan.

Tiger’s Nest alias Taktsang Monastery, Paro, Bhutan. You could fly to Paro from Bagdogra or just drive down as we did.