‘We’re not a note-for-note replica’

A still from 'Rock On'. Below: Luke Kenny (Photo:?Harsh Man Rai, MW Magazine)

A dancer, frontman to a rock band, first male VJ, actor, TV show host, Luke Kenny juggles many roles effortlessly. “I started as a dancer because that was the best activity to have, with music being around at that time. I also did have a band simultaneously. So, at times I was doing dance shows once a week, and other times, I was on the college circuit with my band. And, I still am to an extent,” says Luke, who is all set to perform in the city this weekend in a tribute concert to The Doors. 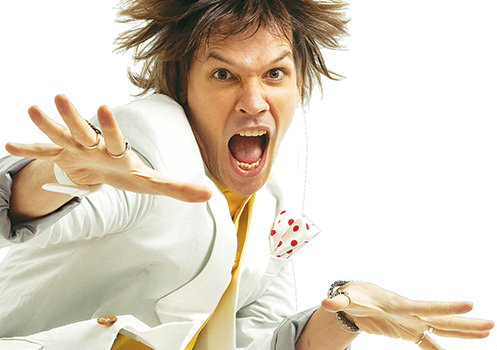 The Doors, says Luke, have always been an inspiration and the concert would definitely bear the influence that rock ‘n’ roll’s biggest icons have had on the popular tracks that he and his band will play. “I always make sure that I bring a memorable experience to the audience as part of the tribute — so it’s not just a band on stage, playing the songs note for note; there is variation and dynamics that constitute the entertainment quotient. Everybody’s favourite tracks will be included for sure; sadly, every single track can’t be played, but I’m sure a lot of people will go home dancing,” he says.

Luke is no stranger to the city. “I have been to Chennai quite a few times. In fact, I enjoy the vibe, the people, the music, the films, but most importantly, the food. And, Murugan Idli rocks!” he smiles.

He grew up listening to a mélange of jazz, rock and some Hindi film music. “My granddad was a jazz man — so he’d play his records. Then my dad was a Beatles fan and a 1960s child, so his era of music was around, and to add to it all, my grandmom was a huge Hindi film fan. So, film music got to me too. And then, I was discovering music on my own as well, via what was going on in the international music world in the 1980s and the 1990s onwards,” he says.

Interestingly, Luke was the first ever male VJ on Channel V at a time when music channels were redefining entertainment. “Music television was a revolution when cable television entered our homes back in the early 1990s. I am glad to have been a part of that revolution as it brought about a change in the way music was consumed and it also provided an international and qualitative alternative to the crassness that had permeated the Hindi film music scene at the time. If Hindi film songs are polished and glossy today, it’s thanks to the music TV explosion from way back then,” says the VJ, who was also the head of music programming and artist relations at Channel V.

'Rock On', a coming-of-age film revolving around four ‘indie’ musicians at a time when commercial music ruled the roost, propelled Luke into the limelight. “It was a great experience,” he concedes. “Working with the team was like being a part of a well-oiled machine. The production was smooth, the script was locked and the crew was a family. Farhan (Akhtar), Arjun (Rampal) and Purab (Kohli) and even Shahana (Goswami), Prachi (Desai) and Nicolette (Bird) were all happy people to be with. It was a great time,” he reminisces. However, he points out that the journey was far from easy. “My context is that I have had no family, contacts or any ‘godfathers’ in the industry. So you know what a challenge that is in itself, knowing the industry. Building everything from nothing is a daily challenge, because the landscape, as we know it, is in a constant state of flux, and there are always new hurdles to overcome in many little ways. Some of it becomes easy because of my current brand value, but still.... there’s always a corner to turn,” he says, pensively.

Having been a part of an indie-inspired film and also the face of a popular music channel, Luke is happy to see the way indie music in the country has shaped up since those fledgling days. “I appreciate the fact that most musicians today are striving to find their own voice with whatever it is they want to do. And as modest as it may seem, I am part of that landscape too,” says Luke who is also an avid traveller and has hosted Luxury Train Journeys in India on Travel Channel (UK). “Every place I’ve visited has been memorable in its own way. Paris, Ireland, Himachal, Leh-Ladakh, Puducherry, Cochin, Sikkim and Mauritius are some of the beautiful places I’ve been to. There are still so many more to go to. The earth is the most beautiful planet in the Universe,” he says.

When he’s not touring with his band, Luke enjoys watching films, reading and promoting vegetarianism. “I have been a vegetarian for a long time now. I believe in its health benefits as well as its environmental ones. Most importantly, I love animals and am averse to any ill treatment of any kind. I do support a few other animal NGOs as well. I believe that if we take care of the animals then we take care of the planet,” he says.

With the year drawing to a close, what are Luke’s New Year Resolutions? “More films, more music and more Luke Kenny,” he says, in parting.

Catch Luke Kenny and his band perform  at ‘The Gateway Revolutions - Tribute to The Doors’ tonight from 8 pm onwards. The tickets are priced at Rs 1000 per head and are available at the hotel. For details, call 044 66802500

■On 'songo' with Congorock!
■All about the vibes
■No sugar coating!
■Dubstep in town