The face of Nelson Mandela is shown on a large billboard in the stands at the memorial service for former South African President Nelson Mandela at the FNB Stadium in the Johannesburg, South Africa township of Soweto on Tuesday. AP

Johannesburg: Presidents, Prime Ministers and other heads of State assembled in the FNB stadium at Johannesburg to honour Nelson Mandela at a memorial service on Tuesday.

Madiba lived a life of sacrifice while pursuing seemingly impossible goals for his people. For complete speech, click here.

Indians have long admired and identified with him and all that he stood for. We will also cherish his love for us.

Mandela was truly an icon of universal change.

He was a towering personality of great compassion and wisdom who guided his nation through long dark years of apartheid.

Madiba's life and struggle represented hope for downtrodden in South Africa and elsewhere around the world.

He followed the same principles of unviolent struggle which Gandhi stood and have often expressed his admiration for the Mahatma. It wouldn't be wrong to say that his stoic determination and personality often reminds us of our father of the nation - Mahatma Gandhi.

Pranab Mukherjee also brought focused on one of Mandela's visit in 1995. Mandela as the first President of post-apartheid South Africa, visited Gandhi at the latter's ashram in Sabarmati. Mandela even went on to say the experience was like a pilgrimage.

Nelson Mandela also acknowledged the influence of two of our greatest leaders - Mahatma Gandhi and Jawaharlal Nehru - on him.

It was our honour honour to confer upon Mandela our greatest civilian honour, the Bharat Ratna in 1990.

Pranab extended his condolences to the people in general saying, 'We identify with your sense of loss. Thank you. Jai Hind.'

(In this image from TV, US President Barack Obama speaks to the assembled crowds at the FNB Stadium in Soweto, South Africa. AP)

Obama began his speech by thanking the people of South Africa by gifting Mandela to the world.

Mandela moved the nation towards justice, and in the process moved billions around the world.

Like Gandhi, he lead a resistence movement. Movement which had little chance of success.

Obama pays homage to Mandela, calls him 'giant of history'

Obama compared Mandela with Mahatma Gandhi and Martin Luther King. He also pointed out that the anti-apartheid icon held South Africa together through hard times, just like Abraham Lincoln.

He also had the willingness to step down from power, thereby showing how a true politician is supposed to be. He is nothing short of an icon, though he himself resisted being called the same.

He earned his place in history through struggle, bringing our faith back in the power of action and the power of ideas.

Whatever he did, he did so knowing the full consequences of the actions, and thereby showed complete dignity.

UN Secy General started off his speech invoking what Mandela stood for. He reminded the South African people why the country is called the Rainbow Nation.

He offered his condolences to the Mandela family, especially Winnie Mandela.

Madiba was angered at injustice and not at individuals.

At this point, everybody in the world is united in mourning one of the greatest leaders of our time.

Ban Ki-Moon thanks the crowd, bows out. 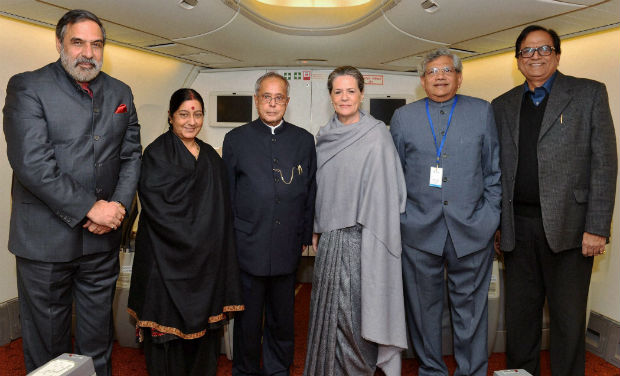 President Mukherjee will be one of only six heads of state who will address the crowd at the memorial service. He will join Obama, Brazilian leader Dilma Rousseff, Hifikepunye Pohamba of Namibia and Raul Castro of Cuba as well as Chinese Vice-President Li Yuanchao on the podium to address the crowd.

Mukherjee summed up the mood when he said shortly before leaving for Johannesburg that his visit to South Africa "reflects the high degree of love and respect which Dr Mandela commanded in India."

"My delegation and I hope to convey to the government and people of South Africa the intense grief and personal loss that we in India feel over the sad demise of the great soul - our beloved 'Madiba'," he said. "His life was a living example of human strength and courage in the face of brute force and gross injustice. "He was the last of the giants who led the world's struggles against the colonialism and his struggle held special significance for us as we saw in him a reflection of our own prolonged anti-colonial struggle led by Mahatma Gandhi," he said.

It was at the 95,000-seat FNB Stadium where Mandela made his last major public appearance during the 2010 football World Cup.

Mandela, 95, who had been suffering from a recurring lung infection and a prolonged spell of ill-health, died on December 5.

After today's memorial service,Mandela's remains will lie in state for three days at the government buildings in Pretoria, the same where he was sworn in as president in 1994. He will be buried on Sunday in Qunu, 450 miles south of Johannesburg, at an event only a few world leaders are expected to attend. Scores of other foreign dignitaries have already arrived in the country for the memorial service. There has been an "unprecedented interest" to attend the revered statesman's funeral, South African Foreign Minister Maite Nkoana-Mashabane told a news conference here.

The two wives of Mandela – Grace Machel and Winnie Mandela – had an emotional reunion.

Despite incessant rain, the packed stadium clapped, sang and danced as they began arriving at the stadium. Many waved banners honouring the revered statesman or carried his picture.

Among the dignitaries from around the world was President Barack Obama, British Prime Minister David Cameron as well as Liberian President Ellen Johnson-Sirleaf. Nobel Peace Prize laureate Archbishop Desmond Tutu and South African President Jacob Zuma were among the first to arrive at the stadium.

The world of entertainment also was well represented with South African actress Charlize Theron and U2's Bono in attendance. Over 90 heads of state are attending the ceremony even as security was tight

Highest per-day spike of 827 positive cases in Tamil Nadu, death toll up to 145