When Akshaya Premnath reached the sets of Jude Antony Joseph's 'Om Shanti Oshana' for the shooting of her debut film she says she was convinced that Nazriya was a haughty girl.

“When I first reached the sets I was afraid to go up to Nivin and Nazriya and introduce myself as I didn't know how they would react. However, Nivin came up and talked and was friendly, putting me at ease immediately. Nazriya, on the other hand, seemed distant. Moreover, most of my friends were also of the opinion that she was presumptuous," says Akshaya. 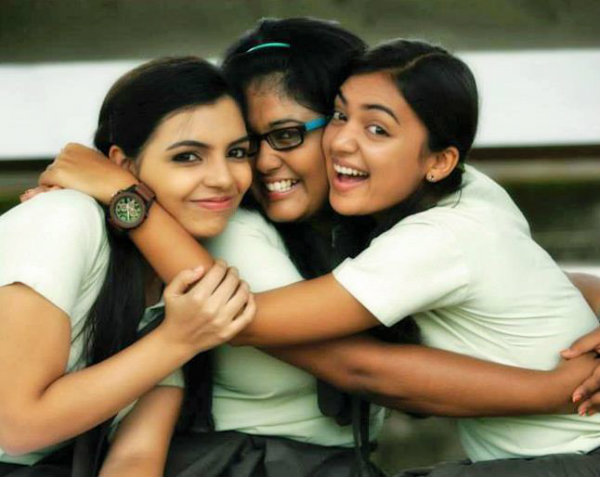 Despite the initial cold shouldering, things began to thaw and soon Akshaya and Nazriya became good friends. “She is the sweetest person I have ever met. All this talk about her being egoistic is nonsense. It just takes her a while to open up, but once she does, she is very friendly and down-to-earth. We had a lot of fun on the sets and when the shooting ended all of us were crying," adds Akshaya.

Akshaya plays Nazriya's best friend in the film along with Oshein Mertil. “We play three childhood schoolfriends and the film is based on their growing up story. It's a romantic comedy and the first half of the story revolves around the lives of the three friends. My character, Neetu, is a playful girl and is a presence alongside Pooja Mathew, Nazriya's character, throughout the movie. Roshni, Oshein's character, is that of a plump girl who is concerned about her weight," smiles Akshaya.

Being her debut venture, she did end up getting scolded a few times. “While dubbing we realised that I had made a mistake in one scene. I was supposed to deliver a line in a cheesy romantic way but I ended up doing it in anger. I got an earful from everyone for that but we somehow managed to get the story back on track. Overall, it was a great experience because most of the cast were of the same age group and the crew, especially our director Jude, was very friendly."

All is well that ends well, we guess.