A galatta kalyanam on social media

When debutant director R.S. Prasanna’s first film, 'Kalyana Samayal Saadham' (KSS), was in the making, the single, 'Mella Sirithai', which was released on You Tube became an Internet sensation and the track garnered around two lakh hits. The 'Mella Sirithai' song became such a rage that a real-life couple replicated the song to reflect their own love life. The film is all set to hit the theatres on December 6 and the 'KSS' team has again made the best use of social media to publicise the film. The married members of the cast and crew of KSS have now changed their Facebook profile pictures to their own wedding pictures. Actor Prasanna who plays the lead with Lekha, put up a photograph of his own wedding in his profile picture, showing him exchanging garlands with his wife, actress Sneha. The director is delighted as fans and movie buffs have been posting their own wedding pictures and that’s helped the team create and reinforce the mood of the film. 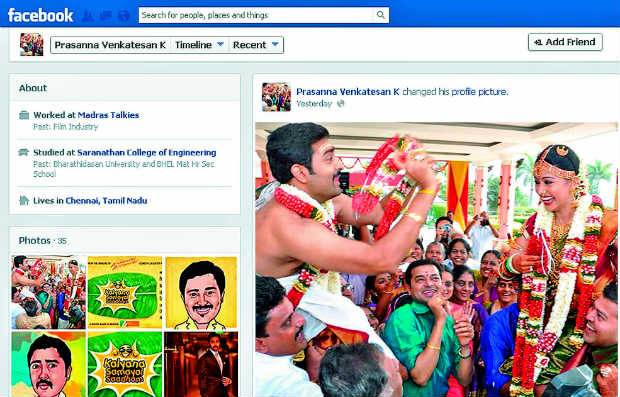 Director Prasanna says in lighter vein, “We have been wasting a lot of time on Facebook, and so we thought it’s a great idea to spread the word about our film here,” he laughs. “But the truth is that social media is the reality. It is a very powerful tool and it empowers common people whose opinions matter because they are genuine and honest. Every ‘like’ and every ‘retweet’ that we get from our followers means a lot to us,” says Prasanna. Of course, social media will never replace the mainstream media. “But we are not going to lose anything by marketing our films here. I’m glad to promote my film in this way because I get to develop a one-on-one connect with my audiences, which is imperative. It puts a face to the name,” he says.

One may recall the pivotal role that Twitter played in overthrowing the Egyptian government, which Prasanna cites as the supreme power of social media. Facebook and Twitter users also own the power to decide the fate of a film. Every 140-word review on Twitter and a status message on Facebook determine the shelf life of a movie. “The reviews that are posted on social media are authentic because the commoner, who writes reviews, is not biased. It is with that fear and respect that we have made this film,” he reveals.

Director Prasanna reckons that the film is scheduled to be released at the right time as it’s the music and wedding season, which is the theme of the film. “Marriage is in the air. We have been enhancing the feel and offering teasers to audiences by posting quirky and funny marriage dance videos on Facebook. And some of our followers have been extremely sweet, posting pictures and videos of their own weddings,” he concludes.