A morning run with the stars

Even the speculations of rains did not dampen the spirits of Hyderabadis who turned up in huge numbers for the 11th edition of the annual Hyderabad 10K run. With the weather playing nice, the crowd got a much-required warm-up session with yoga and Zumba, followed by an energetic dance performance by Shiamak Davar’s institute.

While the run was flagged off by the likes of former badminton champion and now coach, Pullela Gopichand, super cop Anurag Sharma, and the chairperson of the Hyderabad 10k run, Uma Chigurupati; a dash of glamour was added by actors Madhushalini, Sharwanand and Regina Cassandra.

The crowd cheered as a mix of techies, students and corporate professionals participated in the run. Emcees Rahul and Bhargavi entertained the crowd, as singer Sri Krishna made them dance to his numbers.

“This is more like a celebration, with so many people from all walks of life participating. It motivated me to keep working harder,” said Pullela Gopichand, who completed the run in 1 hour and 35 minutes.

Telugu and Tamil film actress Regina Cassandra was another celebrity who completed the 10K run. “It was my first time ever. I must admit, I did not expect such a huge turnout!” she remarked.

How did she prepare for the run? “I would run two km on the treadmill every day but I never really prepared for the run. I just continued my daily gym and yoga sessions,” said Cassandra who completed the run in 1 hour and 11 minutes. 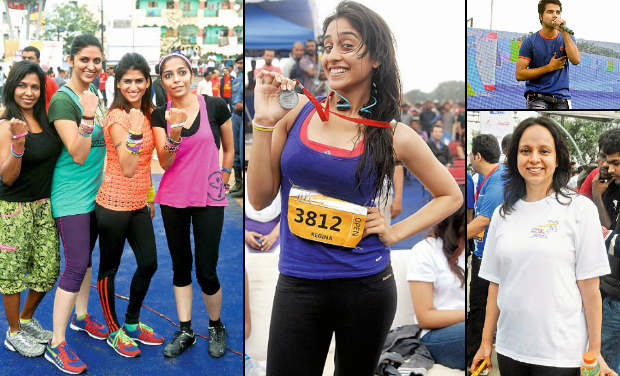 Her colleagues Madhushalini and Sharwanand wished the crowd all the best.

The 7K run was flagged off similarly, with a zumba session and a dance performance to cheer on the crowd before they began. Ex-Army personnel and social worker, 75-year-old S.N. Shah Naqui said, “It feels great to be here. I encouraged many not to give up midway.”

Ravi Shrivastav, one of the amputees from Team Dakshin, shared, “We are all amputees. Some have lost their limbs in train accidents, while some have their limbs amputated in surgeries. We are not heroes, but we want to send out a message to every amputee, that there is life even without limbs.”

Anjana and her bunch of friends were excited on completing the Deccan Chronicle 10K run. She said, “We really enjoyed the experience and will surely participate every year.”

Results of the 10K Run