‘Cell’ a vie in uber natter

There has been much talk surrounding the latest iPhone 5S that is pegged in the Rs 70,000 to  Rs 80,000 range. But this highly-coveted phone seems like petty change in front of a dozen other luxury phones. Those with an eye for luxury products will maintain that the exclusivity is lost as soon as a phone is so widely marketed. That would explain why luxury phones like Vertu that start at $3,000 are some of the few that are never even marketed. And why GoldVish’s ‘Le million’ Piece Unique still is rated as the most expensive phone in the world at a million dollars.

A luxury mobile phone is looked at as the ideal accessory that reeks of understated extravagance, often trumping even a ubiquitous handbag or a pair of super expensive shoes. Says celebrity image consultant Chetna Mehrotra, “A lot about owning these luxury phones is about getting into the super-rich bracket. These people move around in high social circles, and meet people who fall in the super rich category. Owning these exclusive gadgets gives one a sense of ownership and access to the exclusivity that comes with the phone.”

Vertu is the most famous luxury phone accessible in the Indian market. It is renowned for its curated services; a suite of carefully selected exclusive offers, content and assistance selected to enhance the customer’s lifestyle. Vertu LIFE offers customers a personalised selection of exclusive privileges and unrestricted access to elite events available directly on device. Features include complimentary entry to the most exclusive Private Members’ Clubs around the world and closed-door shopping experiences. 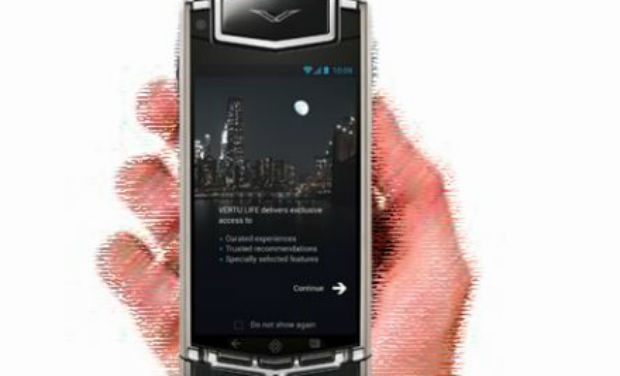 Says Massimiliano Pogliani, chief executive officer, Vertu: “This is a vibrant time for luxury mobile phones. We’ve had three major product launches in 2013 and it helps define a clear segmentation strategy which identifies distinct product lines in our portfolio. This will broaden Vertu’s appeal, attracting new customers to the brand as well as increasing the choice for our existing global customer base.”

One would imagine that for the hefty price tag that these phones come with, the technological specifications would be out of this world. Only five Black Diamond phones were made this year; each phone has two diamond studs of 2 carats each. But it comes with just a 2GB memory card. Yet it comes at a price tag of $300,000. Besides the 150 gm of pure gold, the Nokia 8800 Sirocco has nothing to boast of. What’s worse, it has just a 2MP camera, something a Nokia handset perhaps 10 years ago would offer, and yet it commands $16,000. Then again, it’s like buying a Maserati and asking the showroom owner how much mileage the car would give. “Many people who are seen with such phones have a Man Friday to hold their phone or carry an alternate, smartphone, or a tablet to look into things like these.  What they are looking at is exclusivity, and these phones give them that,” Mehrotra says.

Wealthy Indians are busy making trips to the millionaire fairs in Moscow, Istanbul etc. to get their hands on exclusive phones. After all, with Customs duty costing them at least two times the price on luxury items, it seems like the better bet for our jetsetters. A wealthy Mumbai industrialist’s wife, known for a slew of charitable causes, on condition of anonymity said, “There are luxe expos in Mumbai but they are not in the same league as some of the international shows. Often times, it is about being seen at such events more than really buying anything. But I know a lot of people who pick up mobile phones and watches from these international shows. These phones don’t always hit the Indian shores and you obviously want to get it before everyone else does. Then the cost is almost trebled with duty and other taxes here. You may be a millionaire, but that doesn’t mean you don’t want a good deal.”