From Kolhapur to Canberra

Rishi, the Indian contestant at Masterchef Australia Season 5, won hearts in the popular reality show. Growing up in Kolhapur, where his extended family still lives today, Rishi hails from a traditional Indian family where grandparents, his fathers’ and uncles’ families all lived in a massive family home. A gifted cook, his mother was in charge of cooking for the family and Rishi recalls there always being a big spread on the table. Losing his dad when he was only 15, he witnessed his mother’s transformation from housewife to food entrepreneur. He was inspired by her strength and dedication to step up and provide for her family.  “The inspiration and the knowledge of food comes from my mother. She is a great cook who produces some amazing Indian food, sometimes with rather unassuming and humble ingredients. She is my biggest inspiration,” says Rishi fondly.

His association with food began early in life. “Food has always been on my mind...ever since I was about four or five years old, I think,” recalls Rishi, adding, “My mother tells me I was always running around in the kitchen. Food is what I turn to when I am stressed or bored and I even turn to food when I am angry — so whenever I experience any kind of extreme emotion, I turn to the kitchen.” Rishi confesses that his favourite Indian dish is  Kolhapur sukka mutton, a goat curry from his hometown Kolhapur.

Going against the grain of taking after his family — most of them were medical practitioners — Rishi eventually went on to pursue his engineering degree in the US. Travelling, he confesses, opened up his palate to a wide range of foods. “When I was in the US, I practically lived off Chinese food and I guess that was the first time I was experimenting with cuisine. Eventually, when I came to Australia, I was introduced to a wide variety of cuisine. What I noticed was that there was a lot of South East Asian influence in Australian cuisine and right from Malaysia, Singapore to China, Japan and even India, there was a wide range which gave me ample scope to experiment,” says Rishi, who is 35 years old and works as a public servant in Queanbeyan NSW.
His journey on Masterchef Australia, Rishi reveals, has been nothing but exciting. 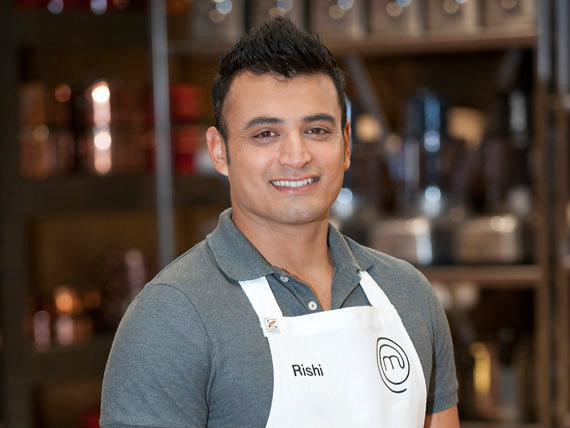 “There are so many memories to choose from, but I think, the week with Heston Blumental would be my favourite. Heston is my food hero. I look up to him because I look up to his ideology — which is, you eat your food with all five senses — taste, touch, sense of smell, sense of hearing and your eyes. If you use all of your senses, the experience of merely eating your food is something that is completely different,” he says. His toughest challenge too, was when Heston was on the show. “We had to basically think out-of-the-box and to top it all off, it was a surprise challenge. We had to make something that looked like a savoury dish or a sweet dish, but wasn’t. We also had to create a theatre alongside it — put up a show of sorts. It was extremely tough and made me sweat a bit, but I think I did well on that challenge thankfully,” he quips. The liver challenge too, was tough, reveals Rishi, when asked if it was one of the toughest ingredients to work with. “The liver lollipop challenge was tough in the sense that the audience we were presenting it to was tough. Kids are not usually fond of liver and we had to present liver in a way that not only tasted cool, but looked cool as well,” he says.

No chef is a true chef until he has had one big disaster and for Rishi it was when he baked a cake as a teenager. “So, I decided to make this healthy cake,” he laughs, adding, “and I used aata instead of maida to bake the cake. It came out like a rock hard piece of cake. I am not kidding! You could throw it at someone and they could get hurt — it was that bad. That was my first big disaster in the kitchen and it also taught me a great deal.”

To know if Rishi makes it to the finals, catch Masterchef Australia Season 5, weekdays at 9 pm on Star World.

A series of extraordinary performances