Thiruvananthapuram: The Ministry of Environment and Forests (MoEF) has given the environment clearance, the last of the four central clearances required, for the Rs 2,000-crore Aranmula International Airport.

The promoters, KGS Group, said that services would begin from the 700-acre  airport from December 2015. Once realised, it will be the country’s first private international airport and the state’s fifth airport.

However, local opposition to the project has turned  more strident. “We will not allow the KGS Group to deposit even a pinch of sand in Aranmula,” said Kummanam Rajasekharan, leader of Aranmula Heritage Village Protection Council.

The MoEF has granted clearance to the project subject to three conditions. One, the flow of Kozhithode, a large rivulet flowing through the project site, which had once irrigated the paddy lands in the area, should be restored to its original state.

Two, filling up should be done only for the minimum area  for the runway, taxi way and apron (the area where aircraft  are parked, unloaded or loaded, refuelled  and boarded). Three, the area not required for the project should be de-notified from its current status as industrial zone.

KGS Group MD Gigi George said that the prime fully-developed land levelled up to 12 feet was almost ready for airport operations. “It will be constructed as an aeropolis in 700 acres with a special economic zone, star hotels, an international school and shopping malls.”

A one-day package will be evolved for Sabarimala pilgrims after consultations with the airlines operating there. “Pilgrims could come in the morning and leave by evening. For southern pilgrims we are working out a rate of Rs 5000-6000 per package and for those from North, it will be Rs 8000-9000,” he said.

The Aranmula airport would not cut into the business of the Thiruvananthapuram and Nedumbassery airports. “This project got clearance from the Civil Aviation Ministry only because it was found that two-thirds of the traffic this airport generates will be new,” he said.

“The sanction has been given by the Centre and the Ministry of Environment and Forests. What can we do about it,” he said. The Congress chief’s remark betrayed both helplessness and a feeling that the sanction should not have been given.

The clumsy first response of the KGS Group, the promoters of the project, has heightened the suspicions surrounding the project. KGS Group MD Gigi George, when confronted by the media on Tuesday, even conceded that certain crucial estimates, which had formed the basis of the MoEF’s sanction, were flawed.

For instance, the report that the Group had submitted to the Centre as part of its economic evaluation had estimated that more than six crore pilgrims reach Sabarimala annually. When he was told that even the Devaswom Board’s optimistic estimate is only three crore, George’s response was an embarrassed half-smile. 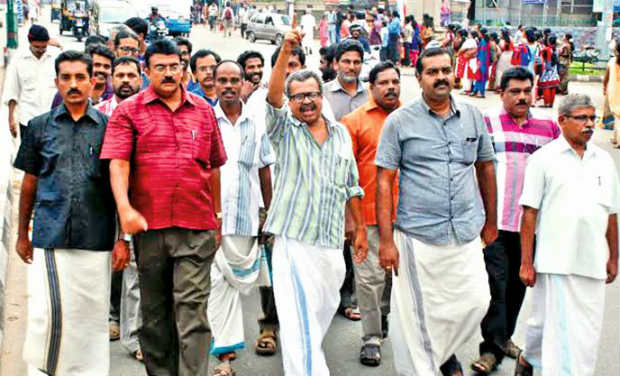 The KGS MD did not give a direct answer to the question whether the Group had manipulated the KITCO (Kerala Industrial and Technical Consultancy Organisation) report that it had submitted to the MoEF.

The KITCO report had a mention of lowering the height of the sacred pole of the Aranmula Parthasarathy Temple for the sake of the airport. KITCO came out strongly against this mention and said its report was fabricated by the promoters. The KGS Group then sought to trivialize the issue by saying that some office staff “might have messed up the report”.

The environment impact assessment done by Chennai-based Enviro Care has also come under sharp attack. “The sanction has been secured on the basis of a ludicrous report,” said environmentalist and former Biodiversity Board chairman V S Vijayan.

“The report stated that Aranmula does not have wetlands, only unclassified land,” he said. The water bodies, especially the wells, will run dry even if landfilling is done in 500 acres. “I am sure once the project comes up, they are going to fill up over 3500 acres,” Vijayan said.

According to Kummanam Rajasekharan, leader of Aranmula Hertiage Village Protection Council, scientific studies have revealed that there are 300-odd rare varieties of medicinal herbs in the groves found in the project area.

The KGS Group’s biggest argument is the role of the LDF in the project. “Most of the sanctions, including cabinet clearance and go-ahead for construction, were got during the LDF tenure,” George said. LDF’s most intriguing decision was the blanket notification of 500 acres as industrial zone.

This has allowed the KGS Group to bypass the Conservation of Paddy and Wetland Act. The KGS Group MD is apparently still surprised at the LDF generosity. “They went and blindly notified 500 acres as industrial zone,” he said as though it was not something even the group wanted. “This led to some villages als%o falling within the industrial zone,” he said. Now, the MoEF has asked the state to de-notify the areas not required for the project.

The official version is that the minimum land required for an international airport is 500 acres. “The 2011 notification was based on this professional input,” a top official said. “Confusion arose because certain survey numbers were included in the notification.

Ramesh Chennithala might have thrown his hands up in seeming helplessness, but not not those opposed to the project. “The Central government is not the highest authority. Above them stands the people of this land,” Dr V S Vijayan said.

YSRC leaders, who criticise NTR, will have no history: Chikkala

Will go back to old pension scheme if voted to power in Gujarat, says Congress