Netas Natter: So near, yet so far

Picture for representational purpose only.&#13;

So near, yet so far

Ever since the exit of political stalwarts like P.T. Chacko and K.M. George, whose names the new generation does not even easily recall, there’s but one man who fits the title of the mascot of the rubber country: K M Mani. To recall a popular slogan, Mani is Kerala Congress and Kerala Congress is Mani; all other KC mutants have been shamed to the margins.

But despite his clout, Mani had never tried to tread on lesser mortals, a trait that had won him accolades from both friend and foe. Even Left leaders don’t waste a chance to praise his exploits, though, of late.

Mani is contented man; his children and grandchildren are doing well and his political career is at its peak. But at 80, Mani feels he has another milestone to cross- the top post of the Chief Minister.

He’s all too willing to don the mantle, but even those who smother him with praises stop short of anointing him. He’s been wooing the CPM but the latter refuses play ball.

The CPM has invited him to a seminar in Palakkad in connection with the party plenum, which the commentariat senses an invite to a bigger job. But CPM keeps him guessing, denying him the ringside berth.

For the while, till he gets the nod from CPM and if ever he gets it, Mani could get ready for his 12th budget, a record like his election from the same Assembly (Pala) for the 12th consecutive term.

After having won the nearly decade old legal battle in SNC Lavalin case, Pinarayi Vijayan wants to reach out to all sections of society particularly the middle class which still considers him as someone who is brash and rude.

At the civic reception a day after the verdict, Vijayan tried to clear some air about his persona.

The CPM strongman attributed his plainspoken nature to the rural background that he belonged to. But even after being in a city like Thiruvananthapuram for almost 15 years as part of his party responsibility, the 69-year-old leader said he managed to steer clear of all the so called urban vices. 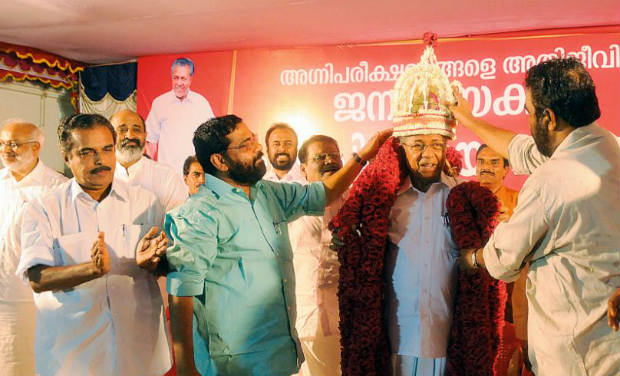 His public admission of being a rustic clearly indicates that he wants to position himself as a leader who is also acceptable to the middle class.

But the man on the street still perceives Pinarayi as a forbidding figure. Clearly he will have to go for a big image makeover from a straight-faced and unemotional communist leader, to a new age leader who is sociable, accessible and pleasant.

At the post lavalin verdict press conference he may have taken pride saying that he never believed or enjoyed in getting applause, kudos or support from outside the party, but the Marxist leader will have to look for all the outside support that he had shunned so far, if he aspires to become the fourth Marxist chief minister of state in future.

Next: Fish that escaped Swamy’s net

He is the unstoppable of Indian politics. Having crossed over to the BJP, Subramaniam Swamy has added more ammunition to his armour.

He was in Kochi last week to attend a seminar organised by YMCA on the subject ‘Corruption and Electoral Reforms’ along with Justice K.T. Thomas and his acerbic tongue did not spare the opponents this time too.

He said that his crusade against corruption has been meaningful and he could make several corrupt people bite the dust. However, with a tinge of disappointment, he added that he has not been able so far to net one big fish who is in the Union Cabinet.

“He is from my home state of Tamil Nadu and played a role in 2-G Spectrum issue” he said without directly naming the minister. Interestingly Hibi Eden, a leading youth leader of Congress, arrived for the seminar a bit late and was spared of the embarrassment of facing the no-holds-barred attack from Swamy on Congress and Congress leaders.

Next: Shanavas pulls off a coup

Shanavas pulls off a coup

Congress MP, M.I. Shanavas, is nothing if he is not a tactician. How else does one interpret his hectoring Thamarassery bishop Mar Remigius Inchananiyil to Delhi and presenting him before the media, the day after the violence in Kozhikode, with a call to shun violence? Till Friday evening, the bishop had maintained that he would rather quit than preside over as a bishop of the evictees.

But the moment he met Congress president Sonia Gandhi, in the company of Shanavas, the bishop was a changed man. All the violence has been perpetrated by extraneous elements that sneaked in among the otherwise peaceful band of agitators, the bishop said.

This one statement has come as a humungous relief to Shanavas and his party, who would otherwise have been engulfed by a virtual electoral tsunami from the settler community over the implementation of the Kasturirangan report.

The wily Shanavas has upstaged the Left that hoped to ride the crest of an anti-Government wave over the Kasturirangan report. Shanavas, considered a loser till he won the Wayanad Lok Sabha seat in the last elections, can now sleep in peace.