A still from The Sound of Music

The young bride looks radiant in her sparkling white dress. As she walks down the aisle of the medieval church, a group of nuns start singing in cheerful chorus: ‘How do we solve a problem like Maria?’ Her bridegroom, Captain Baron von Trapp stands at the altar, stately in his naval officer’s costume. All of us remember this heartwarming wedding scene, immortalised by Julie Andrews and Christopher Plummer in The Sound of Music.   The real life wedding between Georg Ludwig Ritter von Trapp, an aristocratic ex-officer in the former Austrian Navy, and Maria Augusta Kutschera, an orphaned young novice and the resident teacher of his seven motherless children, took place on 26 November, 1927.

In the film, the marriage takes place in 1938. This was not the only liberty that Hollywood took with the real life story of the Von Trapps. The memoirs of Baroness Maria von Trapp, titled The story of the Trapp family singers (1949), provided the inspiration for The Sound of Music. Hollywood picked out the raisins and made fresh dough with them, as Maria Franziska, the second von Trapp daughter, said later in an interview. The novice Maria Augusta was initially employed as a resident teacher for her since she had a heart condition.

In her memoirs, Maria Augusta von Trapp had written that she liked her husband, who was 25 years older than her, but she had actually fallen in love with the children and was marrying the entire family. However, if the version of von Trapp children is to be believed, the memoirs of Maria von Trapp do not tell us the entire story either. The von Trapp progeny claimed after years that their stepmother was nothing like the ever-sweet tempered Maria played by Julie Andrews, but a dominating and disciplinarian matriarch who did not exactly shower them with affection. “She made us play volleyball everyday and her side had to win, always,” recollected Maria Franziska.

The vision of Maria and the children frolicking around Salzburg to the notes of Do-re-mi continues to enchant us. But for the real von Trapp children, it was saddening to see that the film depicted Fräulein Maria as the person who brought music in their lives. They maintained that both their biological parents were musical and all the children could sing before the young novice entered their household. Equally disappointing for the children was the portrayal of Georg von Trapp as cold and aloof, as personified by Christopher Plummer. They remembered their father as an affectionate and fun-loving parent. He did have separate whistle tunes for each of them, but that was because he wanted to use the whistling skills learnt at the Navy when his voice could not reach across the enormous villa. Georg von Trapp married the young novice primarily to provide his children with a mother, though the children were not enthusiastic about the prospect. 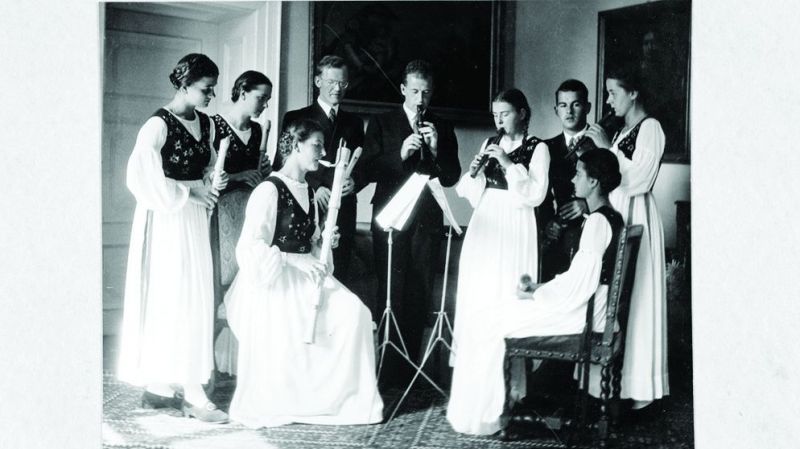 The Von Trapp children practising their music in 1938. The bespectacled gentleman is the family priest, Franz Wasner. (Credit-Salzburg Museum)

Leaving out shades of grey

Between the marriage in 1927 and the family’s emigration to the US in 1938, two girls were born to the couple, further complicating the familial relationships. The Hollywood blockbuster was silent about this, as it was about the fact that Georg von Trapp had lost most of his fortune in 1933 due to unlucky investments. Forming a professional musical choir was a way out of financial difficulties.   For those who were familiar with the von Trapp story, the greatest omission of SOM was excluding the music loving family priest, Franz Wasner, who lived in the Trapp villa since 1935. He was the one who made a professional choir out of the musical family by taking over the musical direction.

The real life Captain von Trapp’s role in the choir was limited to bowing to the audience before and after each performance. The cynical and urbane Uncle Max who appeared briefly in the film was no substitute for Reverend Wasner, who was a close friend of Maria Kutschera. The children seemed to have disliked him as much as her, claiming he was her mouthpiece. Wasner accompanied the family to the US, where the tenth child of the family, Johannes von Trapp, was born. It was whispered among acquaintances that Johannes resembled the priest closely in appearance. No wonder that the Hollywood film, celebrating pure love and perfect family harmony, steered clear of such grey areas.

For the fans of SOM, it is surprising that the film, which gave most of us our first impression of Austria, is virtually unknown there. It ran for a few weeks in Austria and fared no better in Germany. So what made the German speaking world reject the film that still draws hundreds of SOM fans from all over the world to Salzburg every year? One answer is the film’s depiction of Austria’s Nazi connection. The country was annexed by Hitler after the Austrians voted to join the Third Reich in a plebiscite held in March 1938. For a long time after the war, the Alpine Republic was embarrassed about its Nazi past and presented itself as the first casualty of Nazi aggression. The film’s representation of the support of Austrians for the Nazis (remember the scene where Christopher Plummer snubs Nazi enthusiasts?) did not fit in with this victim image.

During the shooting of the film, nearly twenty years after the war, the administration of Salzburg was not keen to allow Nazi Swastikas draping the Residenzplatz, the city’s main square, claiming that the people of Salzburg had never favoured the Nazis. The city authorities relented only when the filmmakers threatened to use actual newsreels from 1938 which showed Hitler being cheered by a jubilant crowd at Salzburg. For the post-war Austrians and Germans, the iconic image of a dirndl-clad Julie Andrews, singing her heart out to the verdant mountains, carried echoes of Nazi propaganda. Most of the mountain scenarios of SOM were shot at Berchtesgaden, not far from Berghof, the Alpine retreat of Hitler. Nazi propaganda photographs often depicted Hitler with the same Alpine panorama in the background. 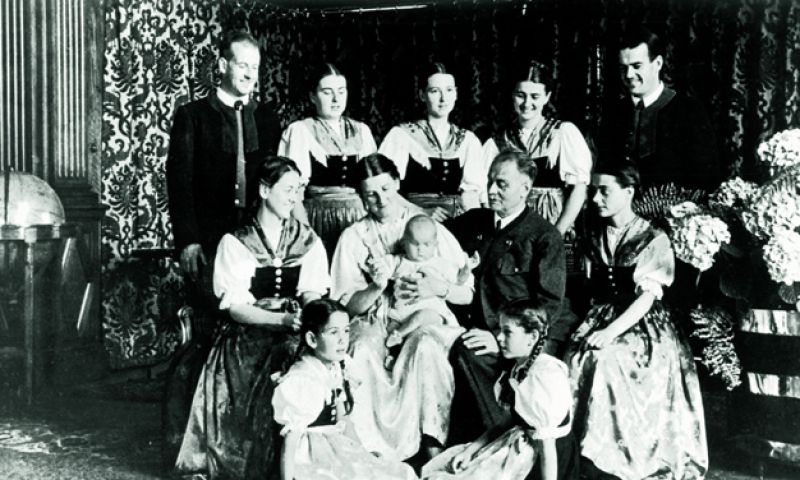 Particularly ironic for those familiar with the local geography was the climax of SOM. The von Trapp brood was shown to flee the Nazis at Salzburg, effortlessly climb the Alpine ranges with their packed musical instruments and land almost immediately into the neutral territory of Switzerland. The escape route is geographically questionable since after crossing the mountains at Salzburg one reaches not the Swiss Alps but Hitler’s territory of Berchtesgaden (the scene was shot there). In reply to this charge, the film director Robert Wise is said to have quipped, “Hollywood makes its own geography,” thus earning ridicule from the German language press.

Besides, the Austrian and German filmgoers were only too aware that Switzerland, though officially neutral, was far from willing to welcome every opponent of the Nazi regime as the film seems to suggest. This audience also resented Hollywood’s dramatisation of the circumstances under which the von Trapp family had to flee. As a conservative German newspaper proclaimed after the film’s release, “Will Hollywood’s hatred of Germany never end?” Actually, the von Trapps immigrated legally and peacefully to the US through Italy. Baron von Trapp, being born in the city of Zadar (in present day Croatia) that came under Italy in 1918, had an Italian passport. So did his children.

The film contained more howlers for the German speaking audience. Among her ‘favourite things,’ Maria mentioned noodles with schnitzel. The latter is a popular dish of meat fried in batter and consumed with sauce, but never ever with noodles. Samosas with rice, anyone? Nevertheless, what prevents us SOM fans from enjoying the Alpine idyll on screen and crooning Edelweiss, Edelweiss… which, contrary to the widespread view, is not Austria’s national anthem. The Austrians find this song particularly weepy and the film, much too soppy. Incidentally, so did Christopher Plummer. The Shakespearian actor privately called the film ‘The Sound of mucus.’ But do we care?

Baijayanti Roy is the author of the recently published book, The Making of a Gentleman Nazi: Albert Speer’s Politics of History in the Federal Republic of Germany