The Indian cricket team presented a Virat Kohli shirt, signed by all the players, to Shahid Afridi on retiring from the international cricket. (Photo: AFP)

Karachi: Former Pakistan T20 skipper Shahid Afridi has acknowledged Virat Kohli and the entire Indian cricket team for the heartwarming farewell gift they sent to him.

Despite diplomatic tensions between India and Pakistan affecting bilateral cricketing ties, the Indian team presented a Virat Kohli shirt, signed by all the players, to Afridi on retiring from the international cricket.

"To Shahid Bhai, best wishes, always a pleasure playing against you," scribbled in Kohli's handwriting in addition to signatures from the entire Indian team.

Reciprocating the friendly gesture, Afridi thanked Kohli and the Indian team via his Twitter account for their `wonderful` farewell gift.

"Thank you to you and the entire Indian team for a wonderful farewell gift @imVkohli. Respect superstar, hope to see you soon," he added. 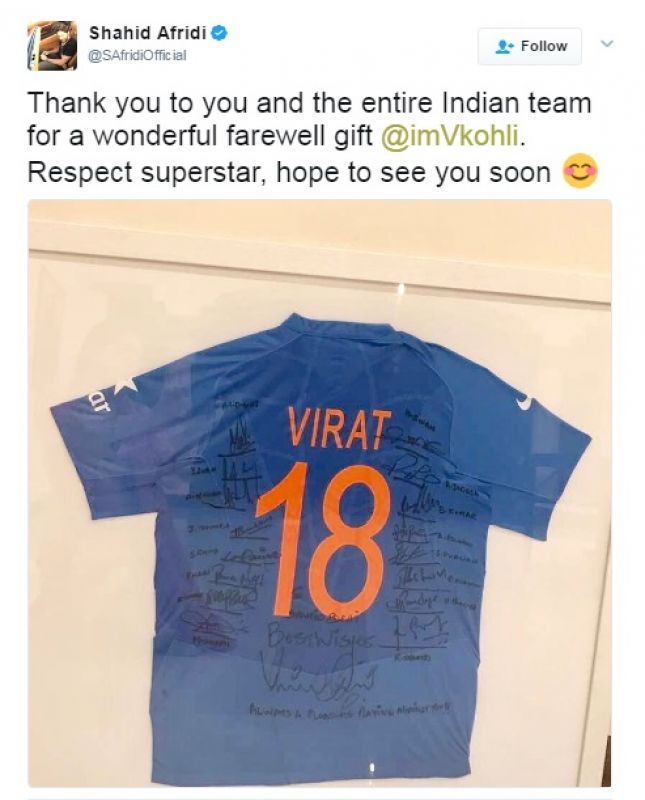 Kohli reciprocated saying: "It's a pleasure to have gifted something of importance and a lasting memory."

In February, 37-year-old Afridi had announced his retirement from international cricket, bringing to an end his illustrious 21-year career.

Nicknamed 'Boom Boom', the all-rounder was active in the International T20 format after having quit Test cricket in 2010 and ODIs in 2015.