Two children dead in our city’s parks, but the BBMP doesn’t seem to care. Shrinking open spaces have left kids with very little choice and the few parks that remain are more akin to deathtraps than playgrounds. Why are authorities so lax about child safety, asks Aknisree Karthik.

It’s  hard to associate deaths, especially of children with  peaceful, green parks, where they go to play. But the city has seen two children meet horrifying ends in its parks in less than a year, raising questions about the quality of their upkeep and the efficiency of the authorities in charge of them.

It was in  December 2016 that six-year-old Vikram Kumar, on a picnic with his family in Lalbagh, was crushed to death in a freak accident that saw a stone bird bath fall on him. The Horticulture Department, which runs the park, was blamed for the child’s death.

And more recently, on August 12,  a 13- year- old girl,  Priya suffered serious head injuries after a slide crashed on her in a BBMP park n MVJ Layout in Mahadevapura. The girl bled to death from her injuries while  onlookers preferred to keep a safe distance rather than going to her help.

While in the last case , the accident was caused as the slide was not fully installed and the girl fell off the ladder, bringing it crashing down on her, the fact that the area was left unguarded and accessible to children is in itself  damning enough.

“Considering the accidents we are seeing in its parks, the BBMP needs to post park managers or supervisors and have first aid kits at hand to help people,”  stresses Ms Mahalakshmi Parthasarathy, secretary, Citizens’ Action Forum (CAF), pertinently demanding to know why no precautions were taken against children using play equipment that was in the process of being installed in the park that cost little Priya her life.

“A park is a place where children come to play. These children were not on the street. Officials and public representatives will understand such loss only if their kith and kin are involved in tragedies like these,” she adds grimly.

Noting that old play equipment in parks are also potentially dangerous for children, she regrets that the enthusiasm exhibited by  MLAs , corporators and engineers while installing it does not extend to maintaining them. “They forget all about the play equipment and let it  rust , break and undergo wear and tear , placing the lives of innocent children at grave risk,” she laments.

As a  case in point the activist refers to a playground inaugurated a couple of years ago in Kasturinagar, which is today in terrible condition. “ It has broken slides that can easily hurt children and the merry- go- round too is in bad shape Are the officials waiting for children to break their legs before doing anything about these playthings? Why can’t they have a maintenance contract in place to fix such equipment when required to ensure the safety of children?” she demands.

‘Very narrow perspective about children’s safety’
The family of 13- year- old Priya, who met a gruesome end at a BBMP park on Saturday, was hardly comforted by Mayor G Padmavathi’s visit and  announcement of a compensation of Rs 5 lakh for her death on Monday.  Although she promised to take action against those responsible for the negligence that cost their child her life, the parents, real estate agent, Subramanya and mother , Vijayakumari, were inconsolable and wanted to know why she had not done so already although three days had gone by since the accident. 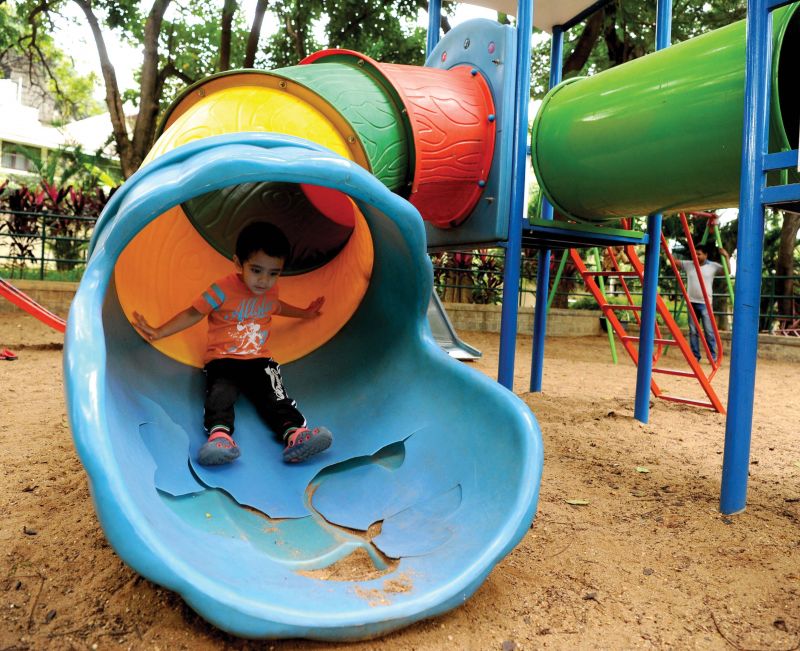 A damaged slide at a BBMP park on 18th Main Road in Koramangala on Monday. (Photo: DC)

Mr Y S Ravi, deputy head of  Civic Learning at Janaagraha, believes that the civic authority was definitely negligent in the incident.

"Signages should have been put in place or physical access to the area where the work on installing the slide was underway should have been prevented, " he says, adding that as children are expectedly boisterous and full of energy in parks where they go to play, parents too have the responsibility of ensuring that they don’t hurt themselves in the process.

As a precaution, he suggests that  all metal play structures be replaced with plastic ones with rounded edges in parks.

“Sadly, there is a very narrow perspective about children’s safety in the city where  it is limited only to ensuring that they travel to school and back safely,” regret other activists.

G Nagasimha Rao, Bangalore-based child rights activist: Why are children’s parks not child-friendly?
The death of a 13-year-old girl, Priya at the BBMP Children’s Park in MVJ Layout is very unfortunate. Sadly, parks in Bengaluru aren't safe for children. Officials, who manage them, don’t even know the meaning of a child- friendly park. Let’s look at the safety of parks in Bengaluru's biggest lung spaces, Cubbon Park and Lalbagh. Be it drinking water taps,  toilets or benches, they are from being child- friendly. How is a child supposed to sit on benches that are too high for it to climb ? If children tried to get on them, they could fall and get hurt.

Children always love to run around and play , especially when they are in groups. But the grounds of Cubbon Park and Lalbagh are uneven and not conducive to such activity. At a few points the level of the ground is steep in these parks and  running children could slip and hurt themselves. These conditions worsen when it rains as it increases the possibility of children falling.

This is a  sad state of affairs when going by Article 31 of the United Nations Convention on the Rights of the Child (UNCRC) children have the right to play and a right to recreation. Today when children are glued to tablets, smart phones and computer games, including the deadly Blue Whale,  where are they supposed to go if the parks aren't safe anymore? The recent tragedy has left parents worried about their children’s safety in parks and they could even stop taking them to them if things are not improved.

Regular visits and inspection of parks and play equipment by the officials concerned are therefore very important. All parks should be made child- friendly and play equipment reserved for children should be used by only  them and not by their parents, who accompany them, or  anyone else who may be over 18.