This photo of two people riding a bike without helmets was taken by member of ichangemycity.com.

Bengaluru: If you still believe you can drive your motorbike on a pavement because no policeman is watching and that you won't get caught, think again! Bengaluru's citizens have decided to not only film these traffic offenders, they are now uploading the pictures of helmetless riders, and everyone else who breaks traffic rules, by using their smartphone cameras to capture the infractions. These are then brought to the notice of the traffic police.

Thousands of members of the general public are now actively policing in the city, day and night. Using an online portal, ichangemycity.com the general public have found 35,798 vehicles violating traffic rules. As many as 35, 083 complaints have already been resolved as of Tuesday. The offences range from parking on footpaths to riding two-wheelers without helmets, violating lane discipline and lots more.

The Traffic police, in the course of their beat, book about 12,000 cases a day using their BlackBerry handheld devices. An additional 8,000 violators are being tracked through contact-less modes like surveillance cameras, digital cameras, and enforcement cameras. 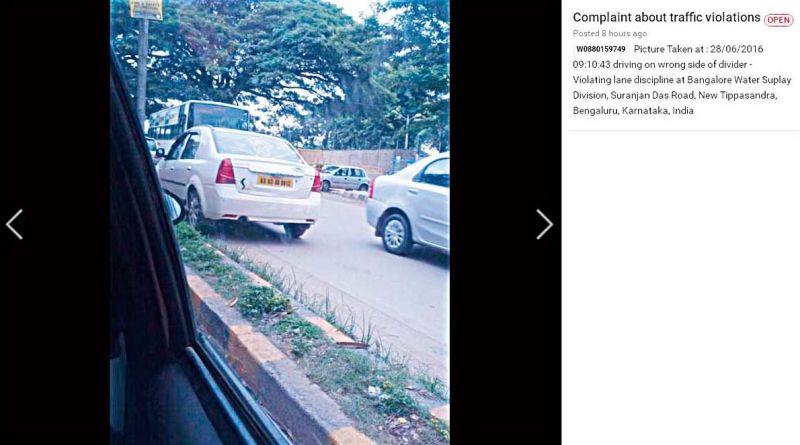 Photo of a car being driven in violation of one-way rule taken by member of ichangemycity.com

Thousands of members of the general public are also on the beat, policing around the city by day and night, freezing violators through their smart phone cameras and uploading the images on ichangemycity.com, an online portal in collaboration with Bengaluru Traffic Police (BTP).

The portal, which is named Public Eye, is also available as a mobile app. It provides easy access to users to upload the violation and bring it to the notice of the authorities. The four kinds of violations that the general public can capture and upload are: No Parking, One Way/No Entry, Parking on Footpath, Riding on Footpath and Riding without a helmet. The user can either sign up through a Facebook account or email Id and post a photograph showing the violation.

Meanwhile, each case reported through the portal is verified by the traffic police based on the date, time and actual place of occurrence. A notice is then issued to the violator.

Prime Minister Narendra Modi turns to people’s trust in him

AP Cabinet extends ban on Maoists for another year