The terrorists opened fire at the police picket guarding the district court complex in Pulwama town in the early hours, a police spokesman said. (Photo: ANI/Twitter)

Srinagar: Two policemen guarding the court complex in Jammu and Kashmir's Pulwama district were killed in the wee hours of Tuesday in a terrorist attack.

The terrorists opened fire at the police picket guarding the district court complex in Pulwama town in the early hours, a police spokesman said.

He said the cops retaliated the firing. In the ensuing exchange of gunfire,  two cops were killed. Following the incident, the area was cordoned off and further details are awaited.

According to an NDTV report, the terrorists stole the rifles and ammunition of the two policemen and fled. The two policemen were identified as Ghulam Rasool and Ghulam Hassan.

"The incident took place at around 3 am. Two of our officers have lost their lives and one is critically injured. Terrorists are being identified & they will be nabbed soon," said Mohammed Aslam Chowdhary, SSP Pulwama.

A wreath-laying ceremony was also held around 9 am for the slain officers. 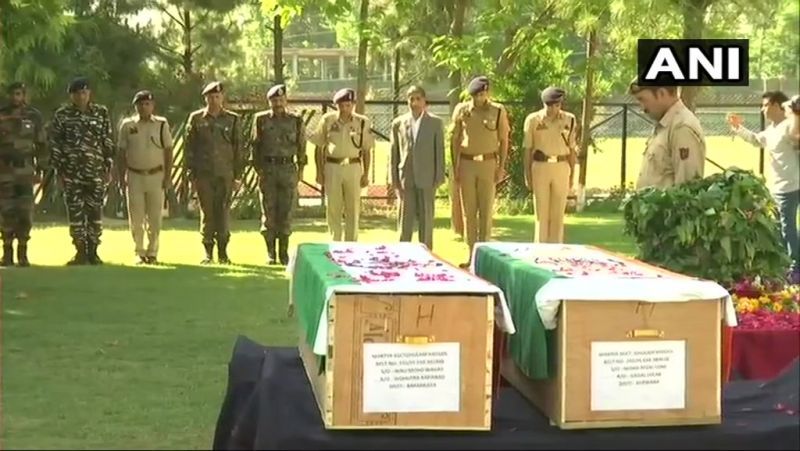 In another attack, 10 CRPF jawans sustained minor injuries after they were attacked by terrorists with grenades in Sadar at around 3 am on Tuesday.

All the injured jawans were shifted to the hospital for treatment where their condition is stated to be stable.

In first 20 days of the Ramzan ceasefire, terrorists have carried out 44 attacks against security forces in Jammu and Kashmir. Security forces on the other hand, have initiated only four operations against terrorists, that too out of necessity, reported NDTV.