The decision to dissolve Telangana Assembly came after KCR held a meeting with his Cabinet on Thursday. (Photo: File)

The chief minister met Telangana Governor ESL Narasimhan and informed him about the decision to dissolve the state Assembly. The governor approved assembly dissolution and asked Rao to continue as caretaker chief minister of the state till the new government is formed. 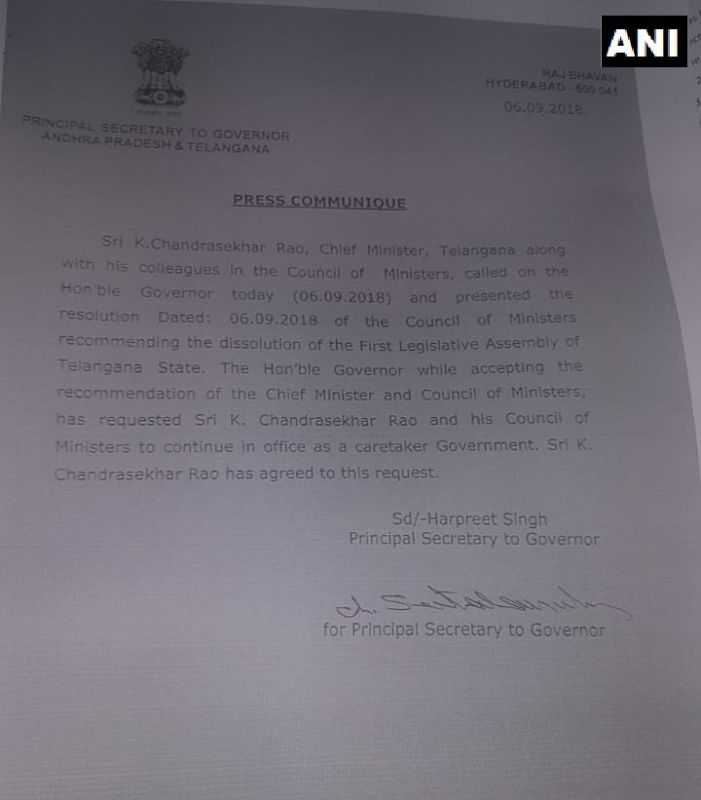 The decision to dissolve the Assembly came after KCR held a meeting with his Cabinet on Thursday.

The Telangana Cabinet meet, the second in five days, came amid speculations that KCR is all set to announce the dissolution of state assembly.

On Wednesday, sources in the ruling Telangana Rashtra Samiti (TRS) claimed that the government has more-or-less made up its mind on the dissolution of the assembly, whose term ends next year, news agency PTI reported.

The sources have added that the chief minister saw an advantage in delinking Assembly elections, which were originally scheduled to be held next year, with the Lok Sabha polls.

In recent weeks, the state government had announced a slew of measures for the benefit of various sections of the society further giving a boost to speculations that the party could go for early elections to cash in on the perceived positive atmosphere prevailing for it in the state.

Addressing a mega rally on Sunday, where the announcement on early polls was highly expected, KCR said that ministers and party leaders had authorised him to take a decision on it in the interest of people and the party and he would take a call soon.

Today’s decision brings the curtains down on the first elected Legislative Assembly in Telangana. The Council of Ministers led by KCR assumed office on June 2, 2014, the day Telangana came into existence as the 29th state of India.

Cyclone Jawad to make landfall in Andhra Pradesh on Saturday