One of the  significant  contributions of the Anglo Indians who  proliferated in select areas in Madras,  like Doveton (pronounced ‘Dufton’ by them), Pallavaram  (‘Pi-laavaram’), Vepery (‘Vepri’), Perambur (as It is) was propagation of Western music,  either melodious or peppy;  or evangelical. One will  not be able to walk down any of the streets in these areas during Christmas time  without hearing snatches of Jim Reeves’ jingle bells, Jingle bells, jingle all the way and other carols in his  booming but soothing voice.

The affluent among them had German Grundig  radiograms, the middle class gramophones, but almost all  a  radio. Madras station of All India Radio played Listeners’ Choice during Saturday evenings,  conducted by an effervescent  RJ. The gramophone  records could be had from Saraswathi stores on Mount road. A wit said:  This store will not proudly advertise  the bumper sale of a particular record with the copy ‘all previous records broken’.

I had a staple feed of songs rendered by  the triumvirates, MS,  DKP, MLV, and Madurai Mani, MKT and the like from our family collections. Furthermore, my two elder sisters used to sing one or two pieces like Jamkara sruti seiguvai and  sarasaksha paripalaya   after lighting the evening kuththuvilakku  in the puja room. The bell from the Sivan temple would sound  as if from heaven. 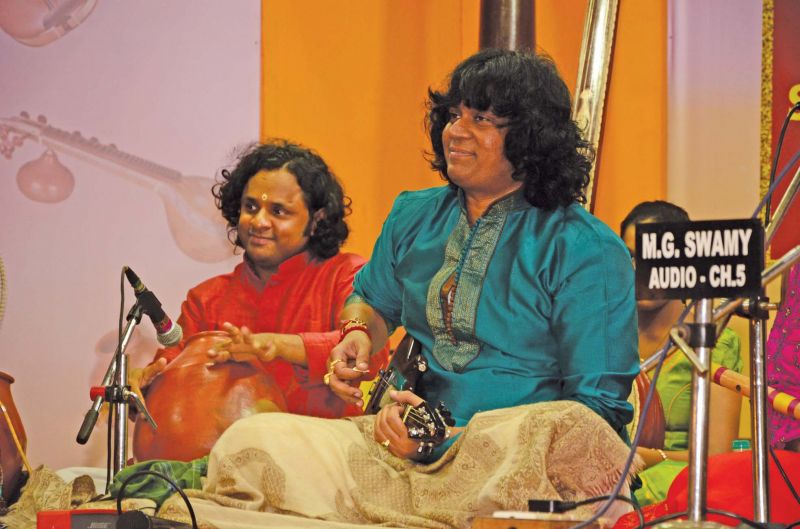 The western music  broadcast by  the All India  Radio introduced me to  Cliff Richard, Chubby Checker, Nat King Cole to name a few. I was startled  to learn the  piece  The laughing policeman, by Charles Jolly  ‘inspired’ later the famous  kalyanana samayal sadam in Maya Bazaar, lip-synched  by Ranga Rao in rapturous delight,  with the mace propped up on his right  shoulder, greedily eyeing the  mouth watering rich spread of the Kaurava prasadam.

My otherwise jovial neighbours  took me to task for  two rash acts. The first one was, bringing down a single reed harmonium from the loft and working on the black and white keys. If this was cataclysmal, the one for which they were prepared to hang me at the crack of dawn  by the nearest lamp post was  for my acquisition  of a bulbul tara. Whenever I started practising on the latter, the street dogs  howled in agony  and our ever pregnant domestic cat spat at me. My grandpa fearing action by  SPCA reportedly sold it in Moore market under cover of darkness.

My next generation had better luck. My  son learnt Carnatic music from a corpulent  lady who  had a  booming voice that rattled the window panes.  When the door of the music room  opened ajar  for coffee service, her voice would hit us in the gut like a piling hammer. My daughter, who joined a missionary  school for girls, had    guitar lessons  from an  Anglo Indian  master  who pedalled ponderously from St Thomas Mount in a  lady’s bicycle. He sang while he played, in his slow measured voice, as if he had many ‘miles to go before his sleep’. The six evenings in a week were allotted pari passu to Indian and Western music, with the result the numbers Gaja-na-na, in full blast from the lady’s throat, my son’s boyish  voice riding piggy back over it, and the strummed notes of Old King Cole was a merry old soul with the dexterous use of plectrum on the cords  by my daughter. She did admirable  balancing act between the Indian and Western music.

It was customary  in those days when important guests visited a family, the kids would be  told to  showcase evidence  of their artistry. Most kids would mercifully  refuse, but not mine. Out will come my son’s sruti box and my daughter’s guitar and plectrum. Guests with sensitive ears will refrain  from wincing out of politeness. As the progenitor, I knew, ‘as you sow, so you reap’.

A tailpiece, to give proper closing, would be in order:  An indulgent uncle of mine  who listened to my son’s magnum opus  Gaja-na-na and my daughter’s scintillating  rendition of Old King Cole watched with amusement  when they ate their evening snack after their performance.   Idli by him and bread toast by her.

(The author is a bilingual humour writer)