Aijaz Khan’s Hamid is the story of eight-year-old Hamid (Talha Arshad Reshi), who is just beginning to learn about Allah and his number — 786, even as there is continuous unrest in his hometown Srinagar and the entire region has a heavy paramilitary presence.
Rating:

Aijaz Khan’s Hamid is the story of eight-year-old Hamid (Talha Arshad Reshi), who is just beginning to learn about Allah and his number — 786, even as there is continuous unrest in his hometown Srinagar and the entire region has a heavy paramilitary presence. Based on a play, Phone No 786, by Mohammed Amin Bhat, the film has the Kashmir militancy as its backdrop, as we see children and some young and unemployed stone-pelters mindlessly attacking police personnel, and sloganeering and playing a prominent role. But credit must be granted to the filmmaker, Aijaz Khan, and writers Ravinder Randhawa and Sumit Saxena who refuse to take sides. Their focus on the lives of ordinary men and women gives us an intimate view of human losses as also the politics that seems to be never ending. The tension-filled atmosphere is enhanced by fine performances by the entire cast.

The changing nature of terrorist threats, both in terms of the type and severity of attack impacts much more than just on death and destruction that any terrorist-infested place brings about. Alongside umpteen stories of unfinished agendas or brutal killings there is also an unbearable pain of hopelessness in the midst of convulsive changes overtaking the world.

Hamid’s beatific smile radiates his divine innocence but the reality of ethnic conflict in the region is not alien to him: the sudden disappearance of his boat-maker father, Rehmat (Sumit Kaul) one night after an encounter with a security patrol gives him enough fodder for him to feed on. Hamid’s family, comprising his only mother, Ishrat (Rasika Dugal) don’t hear anything from the authorities as Ishrat makes the mandatory trip to the police station every other day, only to be told rudely by the authorities to first queue up in a line along with other people seeking information about their brothers, sons, husbands and nephews, and, later, dismissed and asked to leave. 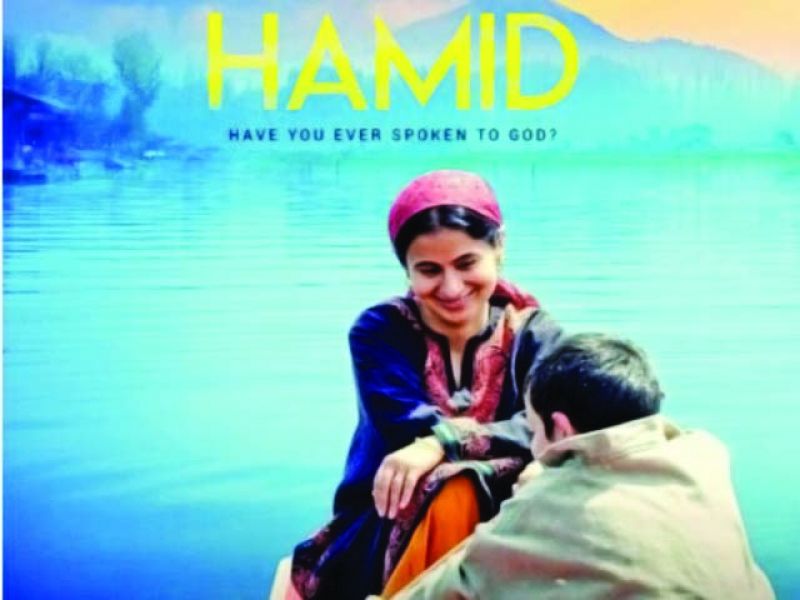 But Hamid’s guiltlessness is his greatest virtue, and he very strongly believes that his father will come back someday. When he learns that his father has gone to Allah by his mother, who is tired of answering Hamid’s queries one day, he decides to reach out to Allah by dialling his number — 786 — to make him talk to his father. After applying his limited mind and using his mathematical calculations, he comes up with a plausible arrangement that Allah’s mobile number could possibly have- 9-786-786-786 and he keeps dialling it till one fine day the phone call is answered.

Little does Hamid realise that the invented number could be a real one, and belongs to a CRPF jawan, Abhay (Vikas Kumar), who firsts shrugs off the phone call as a prank call but begins to enjoy talking to Hamid when the little boy starts questioning him about his missing father, and mistakes him for God.

The conversations then turn personal and the two divergent lives that are severely affected in the strife-torn valley of Kashmir find a reason to feel the need to smile. For Abhay, Hamid’s calls offer a sense of relief and give him a sense of hope to his disturbed state of restlessness. His pretending to be Allah works well in Hamid’s favour, and he develops an unusual bonding with him.

The film could not have been so overpoweringly impactful had it not been for the delicate handling of their roles against such a complex backdrop. Reshi lives the role of Hamid and gets full support from Duggal as mother, Kumar as the jawan and Kaul as his father. A closer look at the lives of these tormented people gives a peek into their mental health, and it probably doesn’t come as a surprise that a terror attack can have a major impact on them, and in some cases, may last forever.

Director Aijaz Khan needs to be complimented for the sensitive handling of the ever-increasing attacks in Kashmir and the plight of the marginalised people without giving us any sort of a biased view. The film relies only on Hamid’s heartrending dilemma and his inability to comprehend the much larger view of the web of complexity that adulthood brings about which remains undamaged, and that is the real strength of the film!