The return of Lal-Nadia magic

It has been three decades and four months but every time a Malayali hears the name Nadia Moidu what come unbidden to their mind are the strains of the song Ayiram Kannumayi and the famous ‘see through glasses’ scene from Nokketha Doorathu Kannum Nattu, in which she played Girly Mathew.      So magical was the combination of Mohanlal and Nadia that to this day, the hit pair is imprinted in the minds of the audience – age no bar. It also helps that Nadia still looks the same as she did when she debuted. So when news of the pair joining hands after 34 years through the film Neerali broke, expectation levels rose.  Speaking from Mumbai, where she is now settled with her family, Nadia candidly says, “It is a Lalettan film and we are all there to support him.” That being so, what is her role in the film? All she is willing to reveal about the thriller is, “I play Lalettan’s wife, who is a  very moody  person.” But she is more than willing to expand on her  experience of working with Mohanlal after so many decades.

She states, “The main  reason I said yes to the script was the opportunity to act alongside Lalettan once again after so many years and connect with him. The second factor was that it was shot in Mumbai so it was easy for me to finish shooting and head back home.  Another aspect that sealed the deal was that the crew was based out of Mumbai itself, so altogether the comfort levels were very high. I knew my character was not huge in terms of screen space but these factors more than made up for it!” When Nadia first acted alongside the legendary actor, she was just an eighteen-year-old debutante. Time has flown by, adding layers of maturity to their personal and professional personas. Nadia states the chemistry between Lalettan and herself has evolved from her first film and explains how, “In Nokketha Doorathu, I did not know Lalettan very well. I was very new to the industry and my whole focus was on getting my lines correct and doing my work right. I did not have much time to talk to anybody because I was engrossed in my own work.” 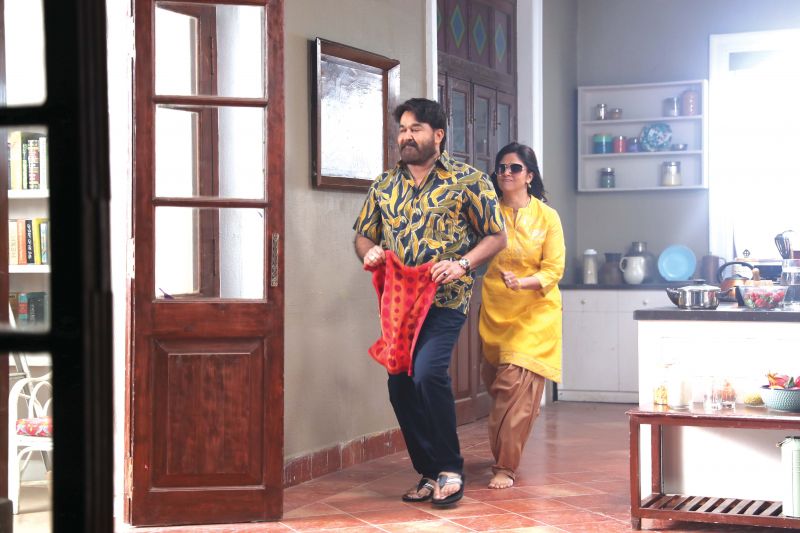 A still from the movie Neerali.

But this time around, she was a veteran and there were a million things to talk about. “It has been a much better working experience this time around,” she gushes. She is also completely in sync with the younger generation since she has two teenage daughters and knows the language of the present generation, be it their music, jokes or thoughts.    Nadia has been active across industries but a truism as old as celluloid itself is the fact that as female actors get older, their opportunities decline with them being sidelined to playing maternal roles. That Nadia says, is true across all the industries.

While on the subject of roles for women, what are her thoughts on women-centric films? Nadia is very positive and feels the audiences are ready to accept such films.  She mentions, “I wish there is money to put into mature subjects, which I feel is a genre that is still very current with the audience. To give an example — you have seventeen-year-olds watching Grace and Frankie (an American comedy web television series starring Jane Fonda and Lily Tomlin, revolving around two older women). So if a youngster can watch that, why are films like that not made?” she asks. A question that goes a begging!  Nadia becomes more vocal when talking about her family. Not many know that she was studying in JJ School of Arts when she started acting and then got married and moved to the US. It is there that Nadia pursued a two-year course in a college on Media Management and B.A. in Communication Arts - Radio & Television. She gives full credit to her husband.

“His contention was that it would make it easier for me to settle in as well as adjust to the Western system better and understand how people work, think and talk. That was a wonderful experience and I really worked hard because I wanted to prove myself,” she reveals. Nadia is also very content being a homebody and adds, “You can even call me boring. I am a hands-on mom and house proud. I like things to be organised and that keeps me on my toes. I have my bunch of friends and my parents live close by and whatever little socialising I do, it gives me happiness.”

Both her daughters study abroad and she mentions, “It is basically my husband and myself at home. I want to learn something new because I have time on my hands now.” When the subject veers to the family-work balance, she very frankly says, “Balancing work and family for any working woman is not easy. When I am working, I am not bogged down by having to take care of my home. So I am privileged that way but before I leave home, I do my bit so that everything is running smoothly.”  She is eagerly looking forward to the impending visit of her daughters. Before signing off, she mentions she is also pursuing some Telugu and Malayalam scripts.