Mumbai: The blogger, who had accused online digital entertainment channel The Viral Fever (TVF) founder and CEO Arunabh Kumar of sexually exploiting her over a period of two years during her stint with the company, has finally come forward and lodged an FIR against the alleged culprit.

In a post, which she deleted later, she wrote: I have spoken to [a] few of us [other women who claimed to have been sexually harassed by Kumar] and have found support. This time around, it's a fight to the finish, hence I won't take names. We have [a] few cases filed in three cities, and one of it is mine, so I would expect [the] courts to take cognisance of that. I hope it reaches logical conclusions. This is my last attempt. I have filed it [FIR] finally. I don't know if it will reach a logical conclusion. If it does, I will drink a bottle of tequila that night. If it doesn't, I will trust that God doesn't exist.

For the uninitiated, about a month ago, an unidentified woman, in her blog under the pseudonym ‘Indian Fowler’, claimed that she met Arunabh for the first time in a café back in 2014. During the course of the meeting they learnt that they both hail from Muzaffarpur (Bihar) and Arunabh soon hired the Delhi University graduate (who was then 22-year-old). Because of the same city connection, ‘main’ soon turned to ‘hum’ and they confided in each other that ‘humko bambai me bahut akelapan mahsoos hota hai (I feel very lonely in Mumbai)’.

Just 21 days into her job and she encounters for the first time what turned out to be a two-year long chapter of constant molestation in the hands of the Chief. In her blog, ‘Indian Fowler’ vividly recalls where their conversation was heading to. She wrote: I was getting where he was leading the discussion to. I avoided an interaction. I said 'Arunabh, aap bade bhai hain. Meri tabiyat thodi theek nahi hai. Kya karna hai bataiye. Hum karke ghar jaayenge (Arunabh, you are like an elder brother. I am not feeling well. Tell me the work. I will finish it and leave)'. He suddenly holds my hand. Says 'Madam, thoda role play karein (Madam, do some role play)'. I was stunned.

"Since then it became routine. Right from Pitchers to Tripling, I was molested. Be it in parties where Arunabh would try to lift me or would try and fall on me pretending he is drunk", she adds.

Even threats of filing an FIR did not discourage the honcho as, he allegedly said, “'police to meri pocket me hai (Police is in my pocket)”. Helpless, she told her immediate bosses about her plight only to get flippant responses like ‘hota hai (it happens)’ and ‘walk out’.

Reacting to the accusations, TVF posted their official statement rubbishing the claims made by this unanimous lady. All the allegations made against TVF and its team in the article are categorically false, baseless and unverified. We take a lot of pride in our team and in making TVF a safe workplace that is equally comfortable for women and men. We will leave no stone unturned to find the author of the article and bring them to severe justice for making such false allegations", they wrote on the blog.

The former employee, who quit in 2016, claims TVF’s legal team still sends her reminders about breach of contract and fears she is being constantly tracked.

If this wasn’t enough, more trouble came knocking at Arunabh Kumar’s door when two other women came out in her support substantiating the claims made in the now viral blog.

Aayushi Agarwal, an ex employee of TVF, wrote: Hello Indian Fowler…I don’t know who you are but I am also an ex TVF employee too and I have had to face a similar experience there. I felt exploited and cheated and I left my job under very bad circumstances. I hope things have worked out for you. It is indeed no place for women. I would never recommend anybody to work there. 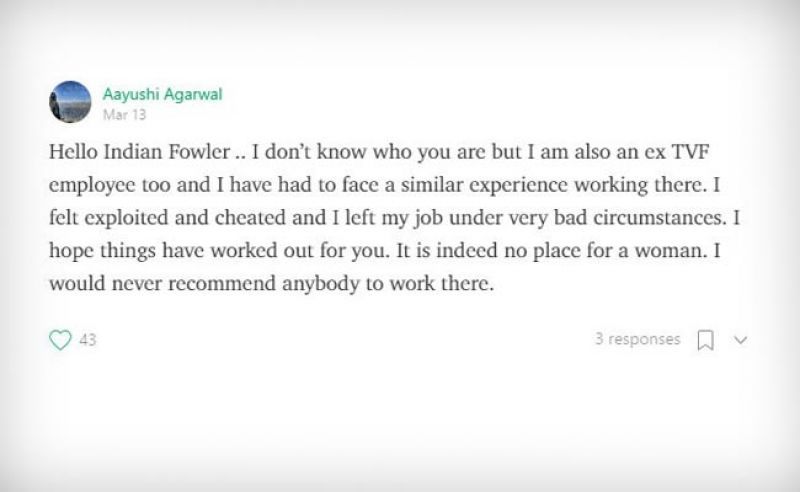 Another woman by the name of Reema Sengupta took to social media to share her experience with the man in question. In a long Facebook post she wrote: To everyone doubting if this is true, know that this girl definitely isn't the only girl he has been a sleaze to.

I was shooting with him in the TVF office, for a web series I was directing last year. The first time we met at the recce, he asked me to send him my work, which I did out of courtesy. When we met on the day of the shoot, I asked him if he had seen the links. To this he said - why don’t you come over to my place and we can watch them together. We can also watch a movie. Which movie do you want to watch? I politely evaded the question and continued briefing him about the shoot. As I talk, he finds some lame excuse to place his hand on my hand (which was on the table in his glass cabin). In the middle of the shoot, he touches my shoulder tattoo and tells me he finds it sexy. After every other shot, he would come over to the monitor to see how the shot looks, but at the same time graze his hand against my waist. All this in a 5-hour shoot. I can only imagine what she must have gone through for 2 years! I remember telling my producer how creeped out I was and how I couldn’t wait for the shoot to be over. He made sure I wasn’t alone with Arunabh for the rest of the shoot. I also told someone at the agency we were working with about it. In fact, this article was sent to me by a friend who knew what had happened with me, asking ‘Same guy, no?’. Do I wish I had retaliated immediately? Yes. I didn’t because the agency and the client would have both suffered. In hindsight, that was wrong and I’m sure they would’ve supported my decision. But today, I had to choose between keeping quiet and extending my support to a girl who has bravely spoken up. So I am choosing to do the right thing. TVF can release as many ‘official responses’ rubbishing these claims as they’d like. This is my truth. Indian Fowler, whoever you are, please get in touch if you need help.