Mumbai: The film touted to be one of the biggest films in Indian cinema history, just got bigger.

After lovebirds, Ranbir Kapoor and Alia Bhatt, both riding on huge hits, ‘Sanju’ and ‘Raazi’ respectively, and Amitabh Bachchan, another star has joined the cast of the Ayan Mukerji directorial.

Tollywood star Nagarjuna is the latest entrant to the alleged warrior drama, who joined the cast in Bulgaria recently, along with wife Amala Akkineni.

The team stepped out for lunch on Sunday, and the pictures with bright cloudy weather and greenery all around is quite a sight.

Nagarjuna wrote on Twitter about the ‘sunny Sunday’ and fantastic lunch’ along with the pictures and how he missed the producer of the film, Karan Johar.

sunny Sunday and a fantastic lunch with the #brahmāstra team..we missed you!! @karanjohar pic.twitter.com/g6SSH2KeRY

KJo welcomed him to the team by expressing how ‘honoured’ and ‘exceptionally excited’ he was to have the ‘one and only’ Nagarjuna for the ‘extremely special role’ and thanking him for his 'love and beautiful energy.'

We are honoured and exceptionally excited to have the one and only @iamnagarjuna doing an extremely “special” role in our film #BRAHMASTRA !! Directed by Ayan Mukerji @SrBachchan @aliaa08 #RanbirKapoor ...thank you sir for your love and your beautiful energy! pic.twitter.com/fVD5sRVQvc

Nag is returning to Bollywood after 15 years since  ‘LOC Kargil’ release. Incidentally, one of his last Hindi films was ‘Zakhm’, directed by Alia’s father Mahesh Bhatt.

Meanwhile, Alia had earlier shared a picture from the lunch on Instagram stories, where she is seen posing with ‘the girls’ make up artist Puneet Saini and hair stylist Priyanka Borkar.

Also read:  Ranbir Kapoor claims Brahmastra is 'nothing like Baahubali'

But did you notice Ranbir in the background? Alia’s boyfriend is seen clicking pictures in the background, and he surely photobombed the picture, but we don’t know if it’s intentional or not.

Alia had a lovely way of acknowledging it, saying ‘Oh and Ranbir.’ 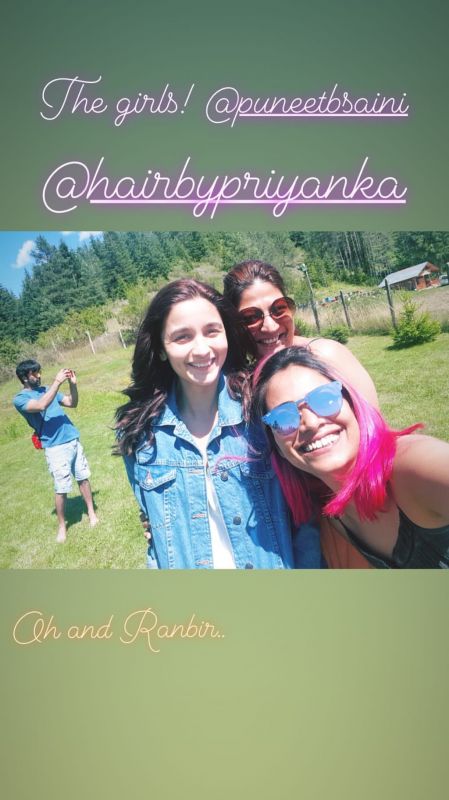 Another member of the cast, Mouni Roy was not seen at the lunch, but she did pose with the Telugu actor, hashtagging him with #justhowwonderfulishe.’

Meanwhile, Big B is in Russia for the football world cup.

‘Brahmastra’ is slated to hit the theatres on August 15 next year.