Illicit wine-makers in the foothills of Himalayas

A local resident pours the juice from crushed grapes as part of a brewing wine process in a garden in the remote village of Sher Qilla in Punyal valley in northern Pakistan. (Photo: AFP)

Sher Qilla, Pakistan: The hems of his jeans rolled, Rehmat Ali climbs barefoot up a tree to pick the grapes dangling from climbing vines, defying hostile religious injunctions against alcohol to celebrate a wine-making tradition that is older than Islam in the mountains of Pakistan.

Every autumn in the remote village of Sher Qilla in the foothills of the Himalayas, Rehmat joins the many agile young people taking to the trees for the long-awaited harvest under the watchful eye of their gnarled and chiselled elders.

Drenched in sunlight, bunches of grapes crown the treetops, where they are safe from the opportunistic reach of greedy farm animals. 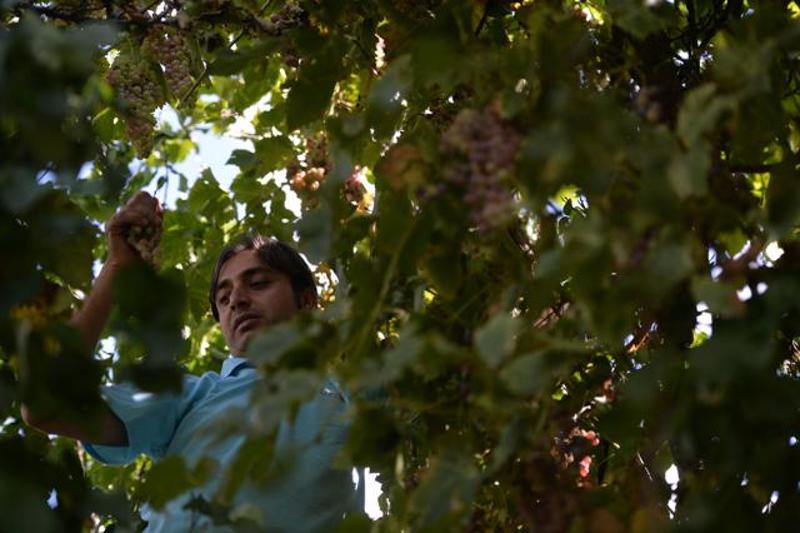 Rehmat -- slim, and with an aquiline nose -- begins to pick the forbidden fruit. Working with his bare hands, he places the green and crimson grapes in a wicker basket that is lowered to the ground along a rope.

The fruit is tossed into the khor, a cement tank washed with icy glacier water, where barefoot villagers trample it to press the juice. 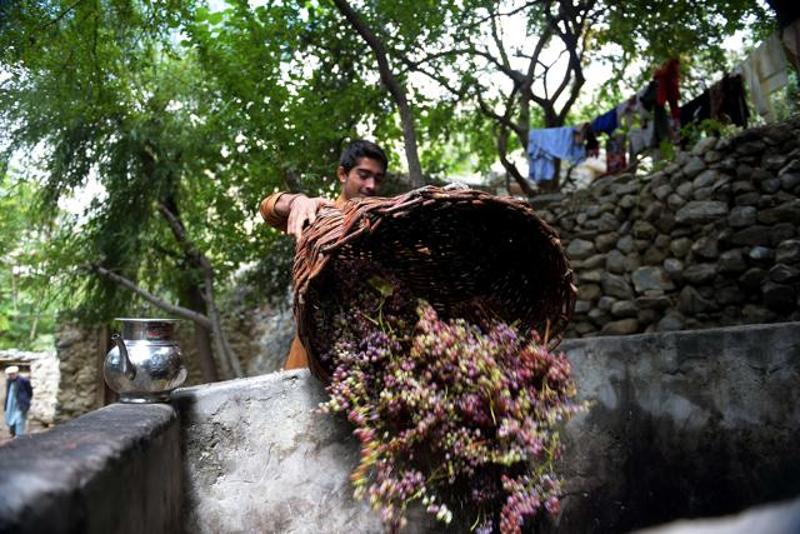 A local resident unloads a basket of freshly picked grapes into a cement tank for brewing wine. (Photo: AFP) 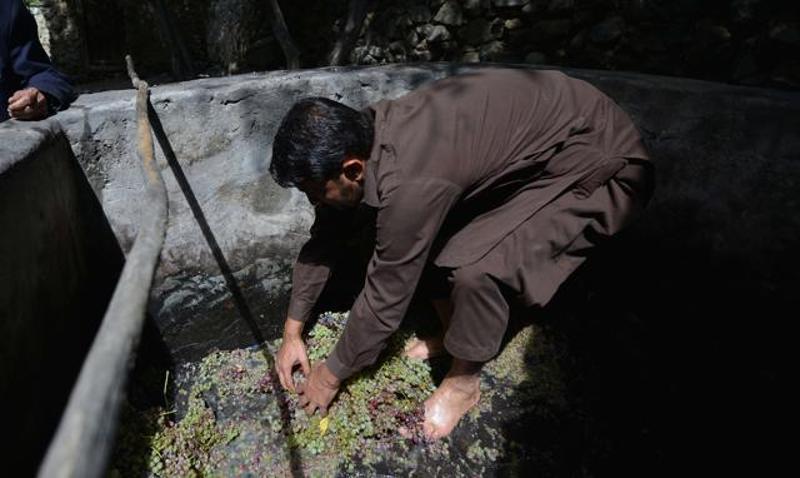 A local resident uses his feet to crush freshly picked grapes in a cement tank for brewing wine in a garden. (Photo: AFP)

Then, beneath the permanently snow-capped mountains, the villagers concoct their tangy, golden wine with undercurrents of peach, as well as brandies of grape and blackberry.

“We learned from our fathers and grandfathers, who were already making wine,” smiles Rehmat, who pressed his first grapes and tasted his first sip of wine at the age of “eight or nine”. 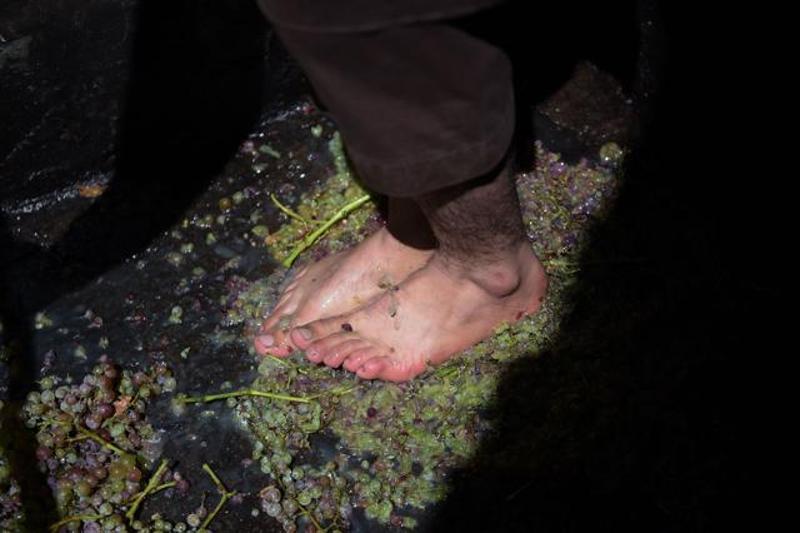 A local resident uses his feet to crush freshly picked grapes in a cement tank for brewing wine in a garden in the remote village of Sher Qilla in Punyal valley in northern Pakistan. (Photo: AFP)

Eighty-six-year-old Ali, balancing his beige pakol -- a flat, soft-topped hat -- atop his head, cranes his neck to watch the freshly-pressed juice hurtling towards the base of the angled khor.

Inhabitants of the remote area converted to Islam in the 16th century -- but, before that, they were Buddhists who, Ali says, were the first to make wine here.

“People have maintained this tradition after the conversion to Islam,” he explains.

When he was a child, he says, “before the harvest, custom demanded we slaughter an animal and pray before we started picking the grapes”. 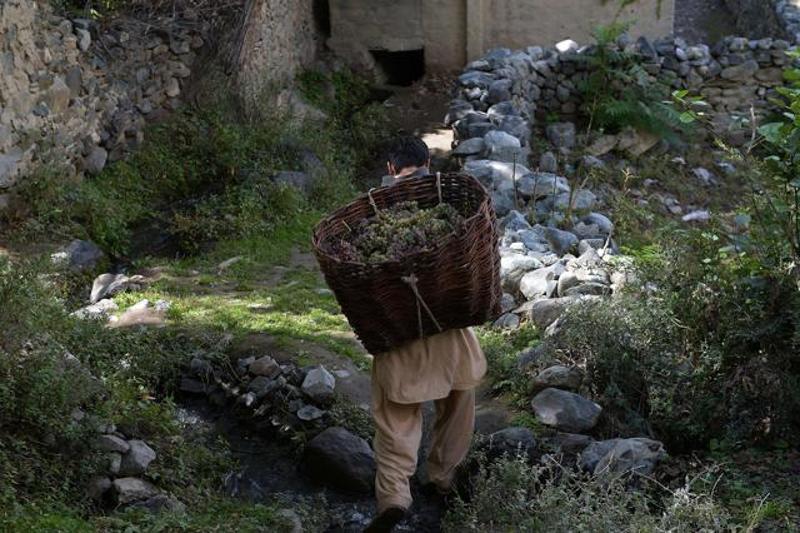 A local resident carries a basket of freshly picked grapes for brewing wine from a garden in the remote village of Sher Qilla in Punyal valley in northern Pakistan. (Photo: AFP)

The juice, he explains, was then kept in an underground stone reservoir. Once fermented, they would lower a hollowed out yak horn on a piece of wire to draw up draughts of wine.

“Not everyone can drink the wine,” says Ali.

“Some are not able to digest it, and the ignorant lose their heads and fight”, he said.

But, he adds, for others, “wine and alcohol nourish love and humility”. 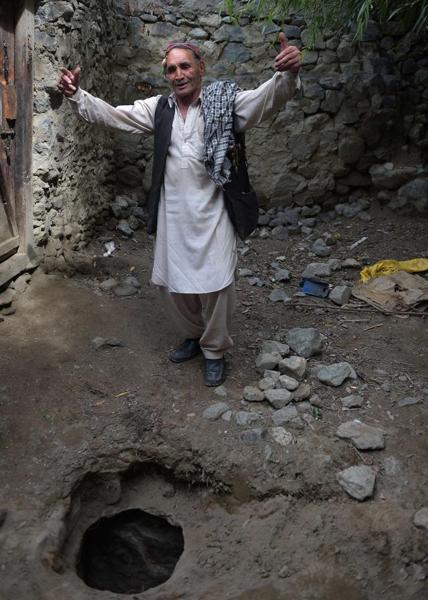 A local resident dances beside a underground tank of wine. (AFP)

Majnoon Omar, an elderly man with a thin green cedar twig tucked beneath his topi, or circular cap, sings of this love.

Whirling languidly, like a dervish in slow motion, he recites his poetry. “You say that my prayers are not legitimate because I have a glass of wine / But you take bribes,” he sings pointedly in Shina, a local language.

Majnoon is addressing his ode to those who, on the side of the authorities, reproach him.

One of the different currents of Islam that flow through the alpine region is Isma’ilism, a branch of Shiism led by the influential Aga Khan, the hereditary chief. 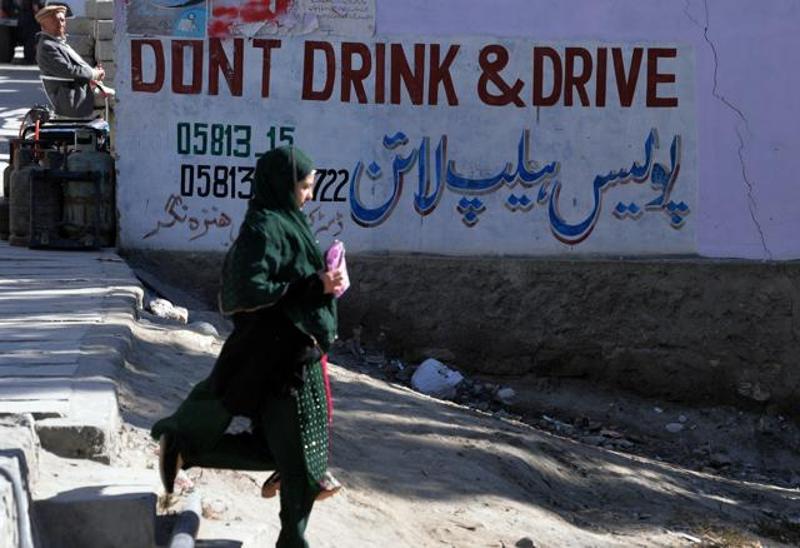 A woman walks past a sign pasted by authorities that says “Dont Drink and Drive” along the Karakoram Highway at Aliabad in the Hunza Valley in northern Pakistan. (Photo: AFP)

The present Aga Khan, who lives part of the year in France, forbids his followers from consuming or producing alcohol, in line with a ban in Pakistan dating from the 1970s.

Some might call the ban fruitless: the walls of some cities in the region are adorned with warnings against drinking and driving.

Villagers say they especially like drinking wine during Persian New Year, at weddings and other celebrations, and even to mark the birthday of the Prophet Mohammed. 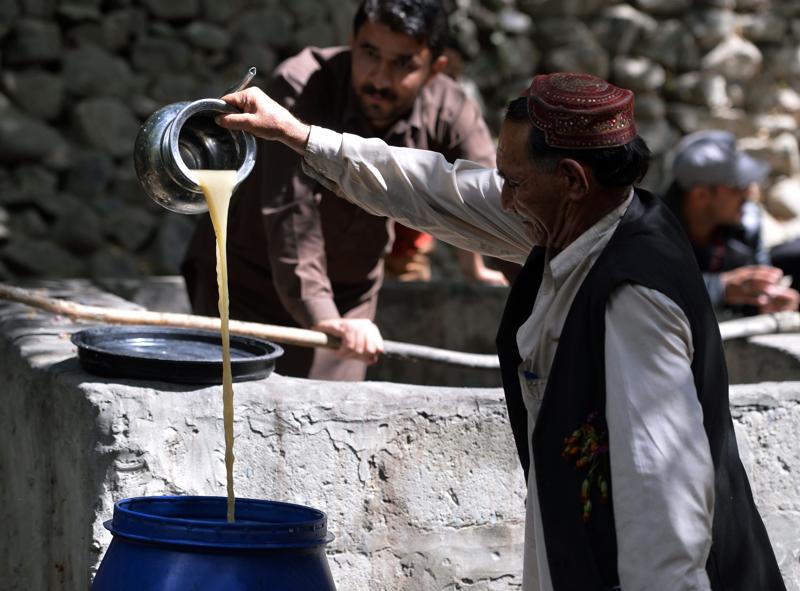 A local resident pours the juice from crushed grapes as part of a brewing wine process in a garden. (Photo: AFP)

Ismailis are not the only ones to produce alcohol in the region: Shiites and Sunnis do also.

Sabirullah -- a plump Sunni with bouffant hair reminiscent of Elvis Presley -- sees the harvest as a mountain legacy that he has no plans to give up.

“Our ancestors had to survive the winter, the alcohol was warming and relaxing,” he said.

“This is part of our culture and it will not die as long as I live.”

Local police, meanwhile, tolerate the amateur wine-making so long as no one is profiting from it.

Mohammad Aslam -- a member of the Ismaili education board who has been trying to persuade villagers in the region not to drink for 30 years -- says the only tool he has is persuasion. 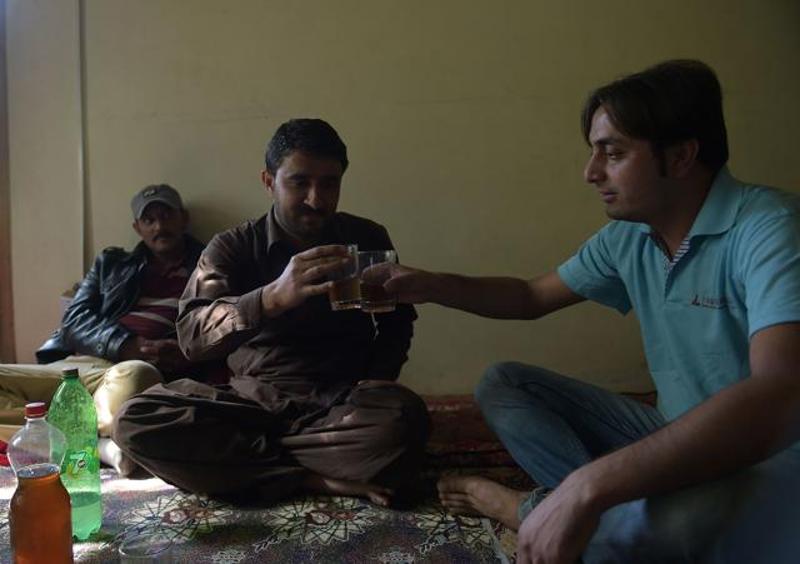 A local resident Rehmat Ali (R) and his cousin toast each other as they prepare to drink home brewed wine in the remote village of Sher Qilla in Punyal valley in northern Pakistan. (Photo: AFP)

“All branches of Islam, including the Ismailis, are adamant about the production and consumption of alcohol: it is ‘haram’, forbidden,” he says.

“I can ask people, I can make them understand. But you see, it’s very difficult to change the habits of people, the cultural habits of the people.”

The elderly singer Majnoon, for one, remains defiant. “Religious leaders are no-one to command or control my life,” he retorts.

“From a religious point of view... people used to say that we shouldn’t drink. It is not so much that it is a sin or forbidden, but that it is not good for your health.